Sudden turnaround for government. Three years after it was suppressed by the baccalaureate reform, math has returned to the common core of the first grade in high school. A modest return this year, in the form of an option of 1h30… which could become mandatory from the start of the next school year. This patch responds to a startled observation: since the reform removed them from the common core to make it a specialty, math is no longer popular: 41% of seniors are off this subject, while previously only 10% were using the calculator and had left the square.

A hemorrhage that sparked controversy during the presidential campaign. Scientific associations, educational experts, personalities such as the mathematician and former LREM MP Cédric Villani and big bosses (thirty of them, from Orange to Michelin, L’Oréal, Axa, Blablacar, have Challenges on 31 March) sounded the alarm: France needs ‘mathematicians’ in its factories and start-ups to maintain its competitiveness and secure its future. Under pressure, President Macron forced his former education minister, Jean-Michel Blanquer, to correct his copy and now insists there is a need to “strengthen” high school math.

However, this psychodrama had the merit of shedding light on the extent of the allergy to mathematics in Descartes and Poincaré’s homeland. A tool to select elites and traumatize the masses, this flagship discipline is both a subject of national pride and shame. On the one hand, the tricolor school of mathematics can be proud of winning 13 Fields medals (one of which was awarded again this summer to Hugo Duminil-Copin), a sort of Nobel Prize in mathematics, just behind the United States (14), a record that ranks it as the first country in the world in terms of its population. On the other hand, our results are falling in the international assessments that have been testing the level of students in this discipline since 1995 (see graphs). Young French have become suckers, last in 58 countries’ CM1 tests, penultimate of 39 in fourth grade (Timss 2019), mediocre 25th out of 79 in second (Pisa 2018). 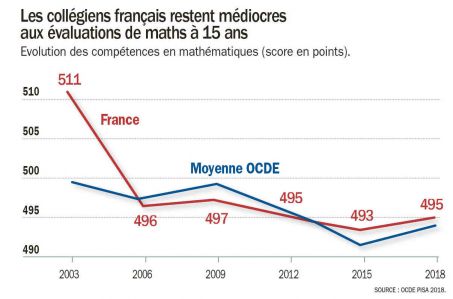 The reception of 16,000 Ukrainian refugee children this spring hit the nail on the head: despite the language barrier, the teachers felt they were at least a year ahead! “Today, half of 12-year-old French people think a quarter is worth 0.4, the Inspector General of National Education Charles Torossian panics. And 70% of fourth-grade students do not master proportionality. This is it French shipwreck.” “We took a long time to admit the reality, bickered about the quality of the tests to drown the fish,” admits his colleague, expert in mathematics, Olivier Sidokpohou.

End of denial in 2018: Charles Torossian and Cédric Villani are tasked with coming up with a plan to “know what to do to get kids doing math”. The result is 21 measures, mainly aimed at primary schools. Contrary to popular belief, the number of hours is not up for discussion. With an average of 182 hours of math in primary school, France is well above the OECD average with 154 hours. Rather, it is the pedagogy that needs to be revised.

Finally, if it’s not the only inspiration, the Singapore method is a must. Developed in the 1970s by the Asian city-state to improve its educational performance, “it is an international synthesis of effective didactic and pedagogical practices” implemented from CP to the sixth grade, the Villani-Torossian report describes. Some ancient, some innovative, especially combining the principles of Montessori, Piaget, Freinet… Its success has been phenomenal, as Singapore has been at the top of all rankings since 1997.

Many countries are trying: Israel, United Kingdom, Netherlands, Australia. But the conservative French education system has long been viewed with suspicion, in the name of teachers’ ‘educational freedom’. Charlotte Dromard, who has been a teacher in the Paris area for twenty-three years, testifies: “I asked myself about the difficulties of some of my students in CE1, so I took maternity leave to learn more about the Singapore method. But that was fifteen years ago, and I had to buy the manual with my own money, tinker with the necessary equipment and convince my management.Training in this method wasn’t even in the National Education catalog, but the results were spectacular in the end- from annual evaluations, to the point where the director asked me how I was doing and colleagues, skeptical at first, took over.”

The principle is simple: study the basic concepts step by step, concretely, slowly, thoroughly. To juggle addition and subtraction and understand the connection between the two operations, children first manipulate cubes, bars, abacus or even physically in some sort of hopscotch game. For fractions, they play with wooden “pie charts”, divided into parts representing quarters, thirds, halves. 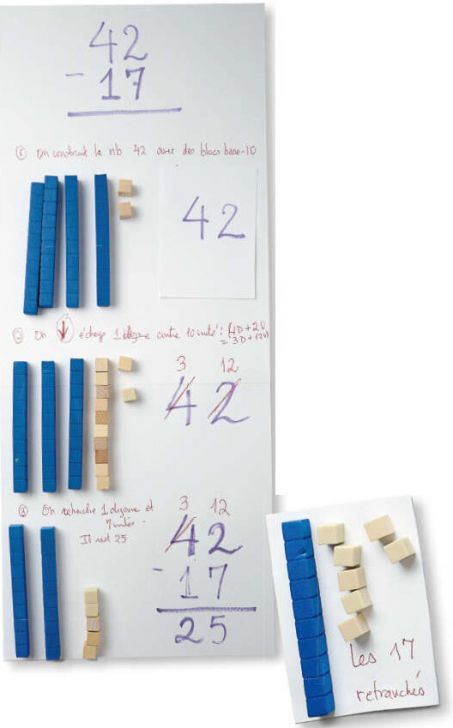 “It is a pedagogy that aims to delay the moment of the abstraction of numbers, the opposite of the French practice of formulas memorized without understanding,” explains Jean Nemo, founder of the Librairie des écoles, the first manuals of the publishing house that translated this method. Monica Neagoy, who has become the “pope” of the Singapore method in France, speaks of “de-intimidation” of the students: “This playful system makes it possible to start the four operations from CP, fractions of CE1, even if the child does not come out of the concrete stage until the fourth.”

With this new national recommendation, the Singapore method is a staggering success. In 2018 and 2019, sales of his textbooks quadrupled. But for it to work, teachers need to be trained. Especially since in primary school, 86% of teachers have studied arts or humanities, and some don’t necessarily feel comfortable or have an affinity with math and geometry. . However, if a teacher in Singapore receives 400 hours of maths lessons in initial training, that is only 60 hours in France. The curriculum in the Institutes of Teaching and Education (INSPE) is already overloaded.

“In two years you have to do everything: pedagogy, class life, the values ​​of the Republic, sustainable development… and prepare them for the competition and do internships. It’s huge”, says Alain Frugière, director of the INSPE of Paris.

In terms of continuing education, it is low: 18 hours per year for a primary school teacher against 100 hours for Singaporeans.

In high school, the problem is different: the candidates for the capes of mathematics have completed higher scientific studies, but they are sorely lacking, these profiles prefer other, more attractive careers. In 2022, 46% of the open vacancies remained vacant. Hence the increased use of contractors, who are often less skilled. And continuing education, not even mandatory for college and high school teachers, lasts no more than 25 hours.

Upgrading teachers is therefore a strong axis of the math rescue plan: “We have plowed the ground, published guides, rediscovered didactics, identified references responsible for educating others,” says Charles Torossian. Objective: to teach 30 hours a year in small groups to 20% of the teachers, so that they will all be there in five years. But the implementation is cumbersome. A report published in January notes that only 12% of teachers could be trained last year, in the absence of sufficiently qualified trainers and substitutes to supplement the mobilized teachers. Worse, of those who benefited, less than a third said they had switched teaching practices!

In college, continuing education as part of the math plan is reduced to less than two days…on a voluntary basis. Jean-Michel Blanquer has tried the incentive by paying the teachers trained during their holidays. Unfortunately, less than 50% of the budget has been used. The ministry has not yet said the last word. “We have also made a whole plan here, with calculation labs, resources. We have put all the academies under pressure to mobilize the teams. It is a decisive year!” warns Torossian. Meanwhile, according to our information, the Pisa tests published in December 2023, but carried out last spring, are not very good. It is hoped that the Timss exams in February will yield more encouraging results. “Continuing with the effort over time is the whole point, emphasizes Olivier Sidokpohou. Countries strong in math, such as Singapore, Finland, Ireland or Quebec, don’t change method every four mornings.”