An NFT game is a game that uses non-fungible token technology (NFT) in gameplay to give players a new experience of owning in-game assets that can be exchanged for real value. Generally, NFT games also use cryptocurrency tokens as transaction tools.

What is an NFT?

An NFT is a digital item that represents real world objects such as artwork, music, game items, and videos. They are bought and sold online, often with cryptocurrency, and are often encrypted with the same underlying software as many cryptocurrencies.

What are NFT games? 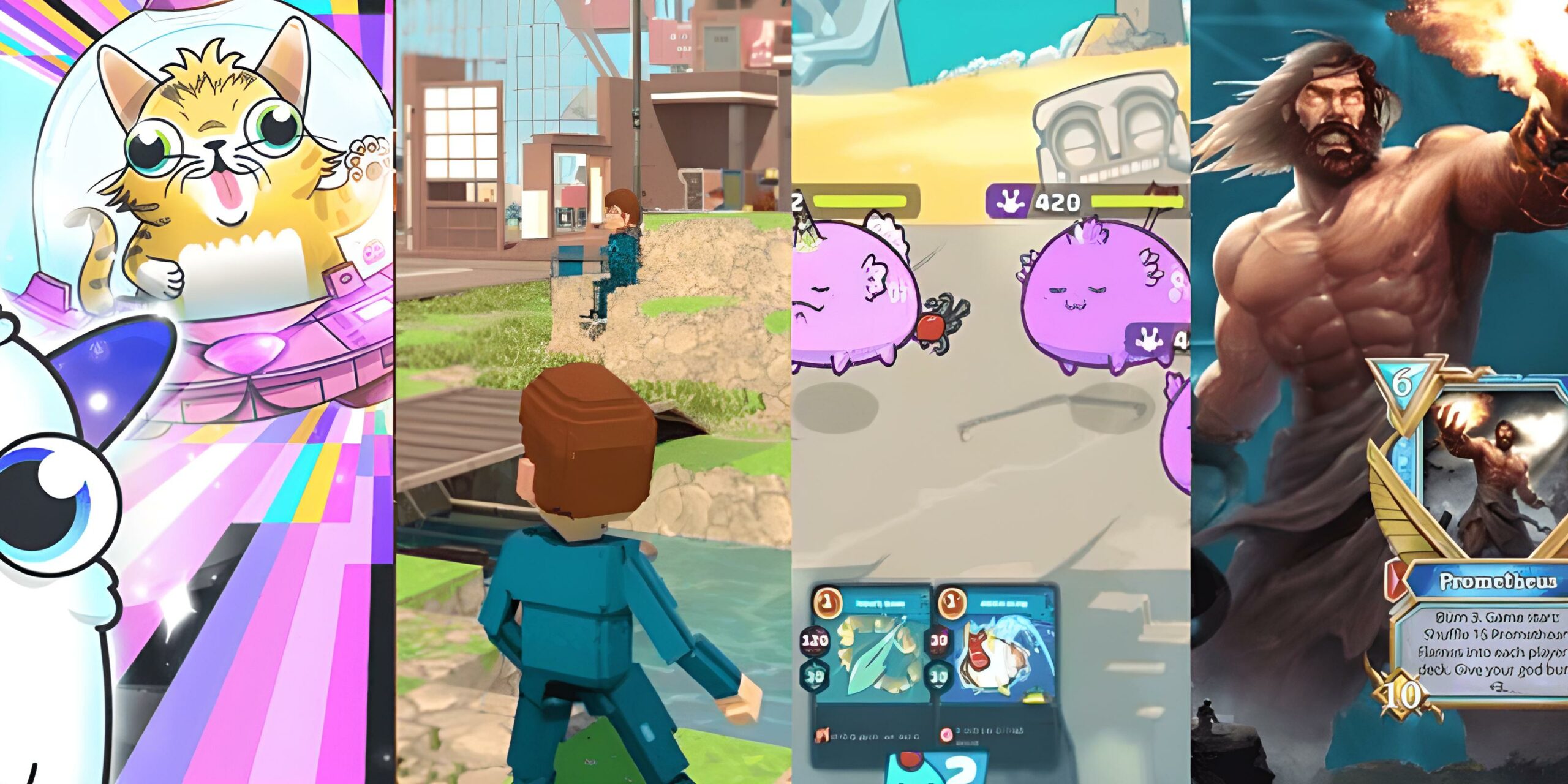 Essentially, NFT games are games that contain NFTs in some way. So they provide ways to use or just earn NFTs as rewards. However, in most cases, NFT game makers opt for a combination of both. As such, NFT games use NFTs in their engine, rules and player interactions. For example, any character, game skin, sword, treasure chest, poison, or any other game object can be represented by an NFT. Additionally, rewards given to players for reaching a certain level or completing specific tasks or challenges can also come in the form of NFTs.

Sandbox is a multiplayer game where players fight over non-fungible tokens (NFTs). Sandbox gameplay itself is an online game that is getting more and more popular with the growing trend of NFT games. In fact, Sandbox was created long before the advent of the NFT trend.

Sandbox has been released since 2011 as a mobile game without any blockchain elements. In 2018, the company took a big step forward and turned to blockchain. SAND is the original token of The Sandbox. It is used as the basis for all in-game transactions and interactions. The SAND token can be obtained from games and challenges on The Sandbox or purchased from cryptocurrency exchanges such as Binance. Download the game from the link below:

Axie Infinity is a decentralized gaming application (DApp) with non-fungible tokens (NFTs) built on the Ethereum blockchain. It is a “play to win” style game similar to Pokémon where players can create, fight and trade digital creatures called “Axies” and earn digital currency rewards.

Each of these colorful “pets” has a combination of different attack and defense cards that are used in combat against artificial intelligence (PVE) or against other players (PVP). Axie Infinity was created in 2018 by Vietnamese tech startup Sky Mavis, but it’s only been in recent months that online gaming has taken over the crypto world. Download the game for Android from the official website at the link below:

The gameplay of this game is excellent, you will definitely love the main quest of the story base if you are a player who like PvE, and if you like PvP action you can have 4v4 matches or join a kingdom to Join the kingdom invasion to fight against other kingdoms on your server.

Devikins is a blockchain game for mobile devices (iOS and Android). This is an RPG style game with mixed Tamagotchi gameplay elements. The game is based on Japanese RPG (JRPG) mechanics that allow users to reproduce and educate their characters from childhood to adulthood in a massive game economy to win.

Devikins users can compete against a monster in the game or against other users under the theme player versus monster (PvM) and player versus player (PvP) battles. Players looking to dig deeper can check out Tamagotchi gameplay where players can grow and connect with the Devikins they own. Download the game from the link below:

Splinterlands is a blockchain-based card game that allows users to play and earn rewards based on certain in-game achievements, such as winning skill-based matches and player-to-player game modes. Trade cards owned by the player in the game are supported by Non-Fungible Token Technology (NFT), making each one unique. Other game items that can be purchased in Splinterland include potions, dice, land, and custom skins.

Splinterland’s in-game items can be purchased and traded on the in-game market or rented out to other players. In-game collectible cards are also featured on NFT platforms such as OpenSea, Monster Market, and others. Splinterlands is considered one of the most active NFT-based games in the space due to its continued growth since its release. It was recently reported that the platform had attracted over 100,000 players. One of the main drivers was the launch of the rental system, where players didn’t have to spend any money to start playing. Download the game from the link below:

Mir4 is a phenomenal game and a big step forward in NFT games because the gameplay and graphics of the previous NFT game are a bit mediocre, but Mir4 surprises its player with realistic and beautiful graphics and really cool gameplay. This game also has a good character customization where a player can customize the look of his own character according to his preference, and the amazing thing is that this NFT game is completely free, you don’t have to play a dime like traditional MMORPG games like Black Desert that you can play for free.

Mir4 is probably the number 1 game to win MMORPG games, because now there are no NFT MMORPG games that can compete with Mir4 in terms of graphics and gameplay, there are many more to come, and let’s see if they are the Being able to beat Mir4 throne for the best and #1 blockchain MMORPG game. This Mir4 game is a free NFT game that you can play on Android, but you need a good Android phone with good specifications of this game to handle the high graphics of this game. Download Mir4 from below link:

“Gunship Battle: Crypto Conflict”, this game is a free to play MMO strategy game with modern war concept where players can build and use modern war machines like building and organizing your battle group. The strike group consists of AFV, IFV and artillery type tanks as a ground unit, but is also accompanied by submarines, frigates and destroyers, as well as fighters.

Gunship Battle: Crypto Conflict is the best MMO strategy game I’ve ever played on an Android device, the graphics are very good as is the gameplay. To win, you must reach at least level 18 to unlock it, play to earn resources, mine titanium in-game and convert it into your official token called “Milico”, which can be converted into cash. Download the game from the link below:

Crypto Ball z, this game is one of the newest crypto game in 2022 that you can play absolutely free. Crypto ball z is an idle RPG game which means players have limited in-game interaction, all you need to do is level up your heroes to make them stronger and survive all the battles they face .

To win in this free NFT game you need to have a lot of Herostone which can be used to upgrade your hero but if you don’t want to use it as an upgrade you can convert this Herostone to the official token based on the blockchain of this game called HERO and convert it to real money to earn money. Download the game from the link below:

CropBytes is a Metaverse gaming project that started in 2018 and is one of the oldest cryptocurrency farming games still in operation. Since its inception, the CropBytes ecosystem has grown and is one of the most active gaming communities in the crypto space. One of the reasons for CropBytes’ success is its sustainable gaming economy where gamers can play and grow their cryptocurrency farm. On these virtual farms, players grow crops, raise livestock, and produce goods to expand their portfolio and earn in-game currency.

Enter a virtual world where you can play in an economy where you can create, cultivate and maintain your farmland while helping the economy grow. Grow crops or breed animals in the stable, grant resources or trade in your community, keep earning great rewards and earn as you progress through the game. With CropBytes there is something for everyone! Designed to truly represent the real world, this simulation lets you work and earn in-game just like you would in real life. Download the game from the link below:

Thetan Arena is an online multiplayer battle arena or MOBA. You meet several other players and then start the battle at a predetermined location.

Thetan Arena offers four game modes, “Battle Royale” for two players, “Dead Match”, “Super Star” and “Tower Destroy” for four players against four players. For those familiar with the Mobile Legend game, you will play Thetan Arena like a pro. The difference is that you can earn Thetan Coins (THC) that you can exchange for real currency. Download the game from the link below:

The games in this list are free NFT games that you can play on Android, there is no cost to play this game or you don’t need to invest to play the game, but all game items can be purchased with real money. bought if you want to make your character stronger, but if you don’t you can play for free as long as you want like some traditional games.

* PortalCripto appreciates the quality of the information and attests to the verification of all the content produced by its team, but emphasizes that it does not make any form of investment recommendation and is not responsible for losses, damages (direct, indirect and accessories ), costs and loss of profit.