FOCUS – In the summer of 2022, the primary school Christophe-Turc underwent a series of works, between the refurbishment of the schoolyard and the renovation of the toilets. While a Place aux enfants is being created on the Allée des Romantiques, with the aim of making this route a safe and car-free area.

Rue Christophe-Turc, the workers are busy completing the first set of works before the start of the school year in September. Objective: to finish the interior of the building, but especially to finish the floor of the new courtyard of the Christophe-Turc School. A brand new playground, designed by kids for kids “, says Katia Bacher, councilor of Grenoble, responsible for the sector.

During a consultation week in December 2021, the young public had the opportunity to express their wishes for the redesign of the courtyard garden to the design office. The discussions thus made it possible to elaborate a project that combines varied activities, recreation and sustainable development.

The Butte du Vercors and the Butte de la Belledonne, two mounds of earth that form the identity of the courtyard of the Christophe-Turc school, so named for its view of the massifs. © Benjamin Houry – Place Gre’net

The courtyard of 895 m² consists of two small pre-existing mounds that give its identity to the Christophe-Turc school. “We have decided to keep them, expand them and make them as green as possible. “, underlines the project manager, Line Lemarchand.

A dozen additional trees will be planted to create more shady space for children. But the starting point of the project remains the need to make the school accessible. Indeed, the courtyard was raised 14 cm, the height of a step.

Water management central to the project

After the old asphalt was removed, the grounds were incorporated with more permeable materials to allow for better infiltration of water to the groundwater table below the school. A ground-level depression called a “landscape valley” was created to allow the rainwater to flow into a cesspool. In addition, there will be a water collector at the back of the building that will serve as a water tank. 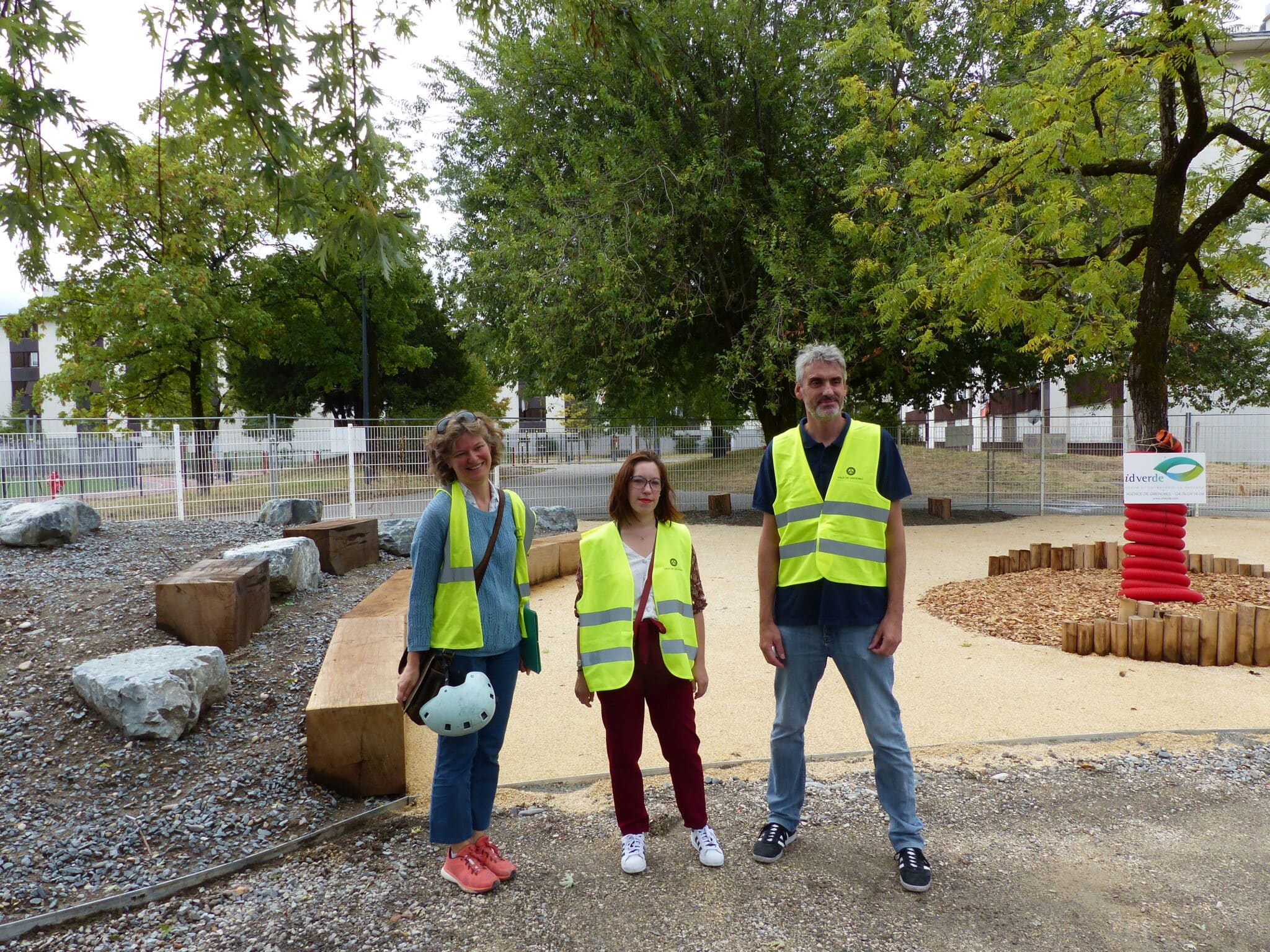 For example, the Rhône Méditerranée Water Board has subsidized this soil permeability project for 26,000 euros. With a double objective, on the one hand aimed at recharging the water table, but also at removing coatings that are beneficial to heat islands. The rest of the investment is financed by the municipality of Grenoble for an amount of 150,000 euros.

A new area designed as a “fun route” for children

The project will run in three phases, the first being the delivery of the furniture and floor coverings at the start of the school year in September. The plantations will then arrive in the course of autumn. Finally, the placement of the furniture part in early 2023. 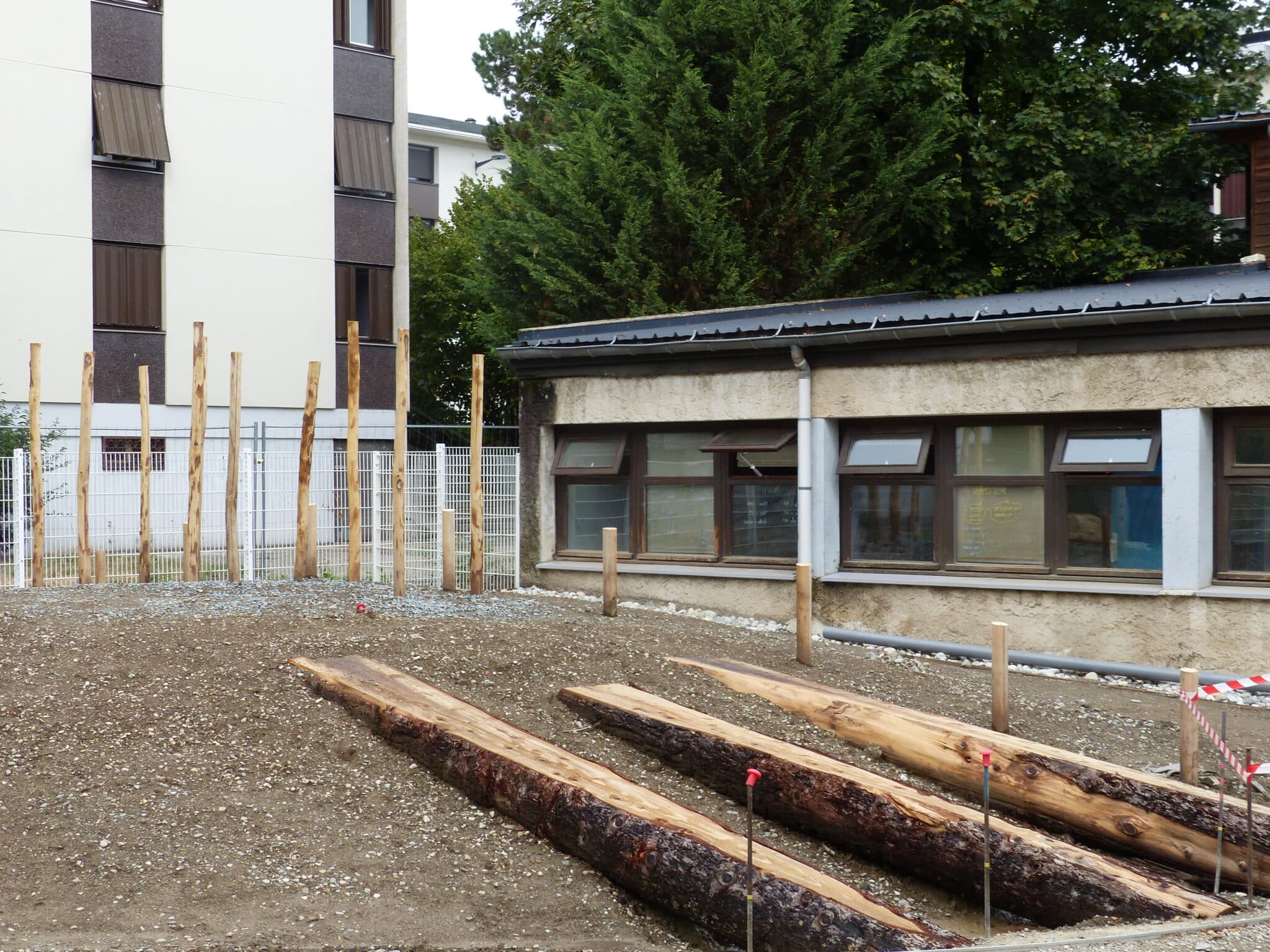 Fallen trees have been placed so that children can descend from the Vercors hill, where wooden games now play the main role. © Benjamin Houry – Place Gre’net

Within projects? ” Benches, deck chairs, a platform and a hut are located at the foot of the hill Vercors” indicates the project manager. In addition, there will be a vegetable garden at the back of the yard so that the little ones can grow their own crops. There will also be a fence to prevent the most enthusiastic children from having fun with the plantations.

An eco-responsible and local approach at the Christophe-Turc school

All these performances will be made from natural and local materials. From granite from Oisans to solid oak blocks, the classic tarmac schoolyard should be just a distant memory when you go back to school! A part will remain in asphalt to be able to practice sports activities, such as cycling or playing ball games. 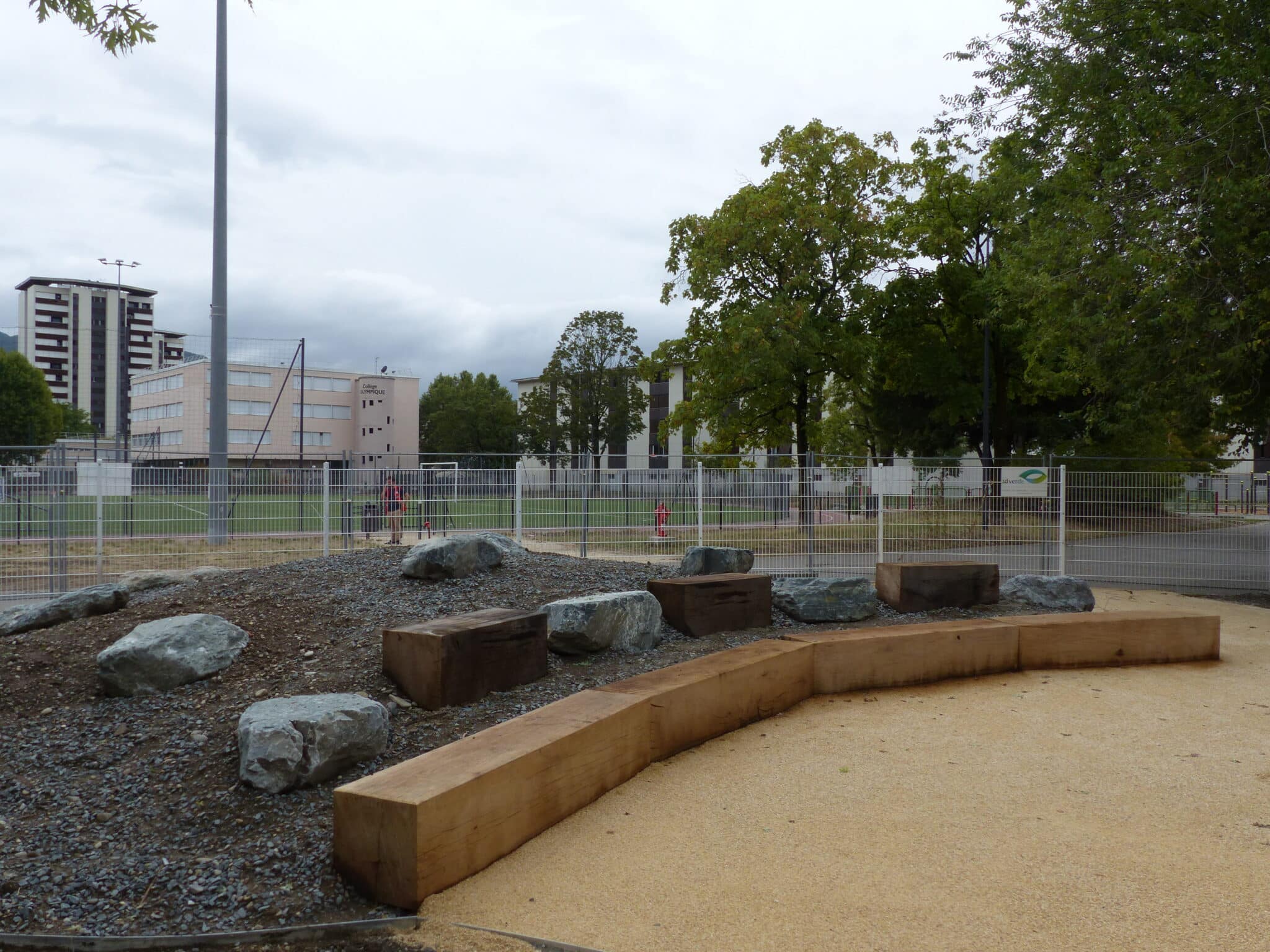 At the foot of the Belledonne hill, a massive oak mini-amphitheatre takes place. A new place that offers teachers the opportunity to teach outside. © Benjamin Houry – Place Gre’net

“We are part of the ongoing transformation of public spaces and schools. Clemenceau’s schoolyard was the first to be demineralized and regrown with real in-depth reflection. The Christophe-Turc school will be the second project to succeed in the field of water infiltration and the creation of cool spaces.” says Gilles Namen, assistant (among others) for Nature in the city and Freshness. Next year, three other schoolyards are to be renovated in the same way.

The Children’s Square on the Allée des Romantiques

Will pedestrians completely take over the Allée des Romantiques? In the section between rue Lorenzaccio and avenue de La-Bruyère (opposite the Marie-Reynoard kindergarten), the road is now closed to traffic by barriers.

The vehicles of local residents will have access to it from time to time (movements, deliveries, etc.). However, the keys can only be obtained upon request from the municipal office. 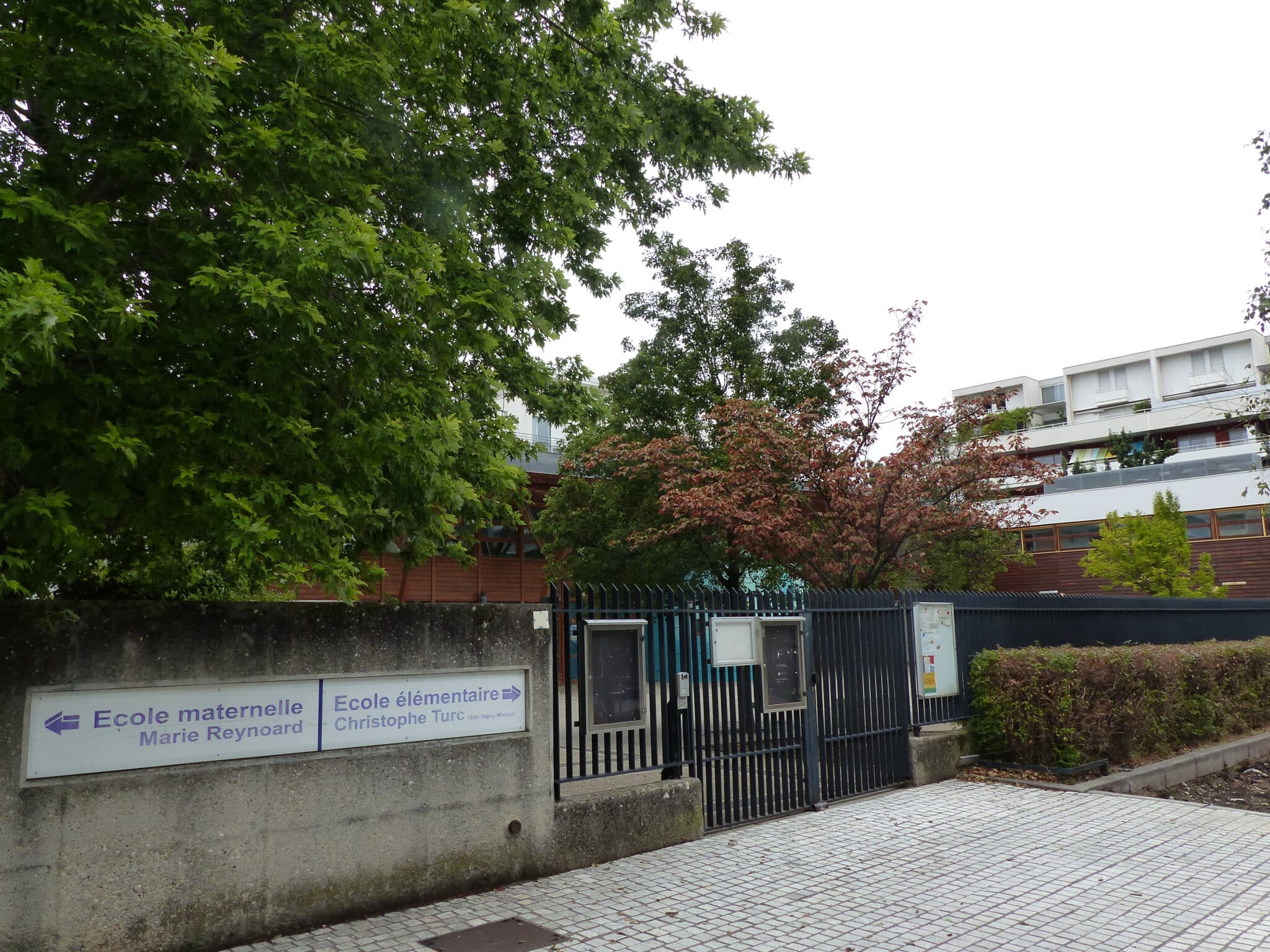 The section of the Allée des Romantiques that runs in front of Reynoard’s kindergarten will become a pedestrian zone. © Benjamin Houry – Place Gre’net

Therefore, barriers are placed to prevent accidental use of vehicles in these areas. Of the ” abuse observed in other places for children. The town hall explains that it has therefore made the decision to close the spaces completely after the initial feedback on the developments.

” The decision to close this street was taken unanimously in September 2021 by the municipality of Grenoble. The agreements were made during consultation meetings with local residents. », says Gilles Namur.

Allée des Romantiques is part of a project to transform twelve streets in Grenoble. Nine will be completed by the end of the year and the last will be completed in 2023. This is a global policy supported by Grenoble. Remove parking lots to plant trees, bicycles, widen sidewalks and de facto encourage people to leave cars in the garage more, promote car sharing “, specifies the public space assistant. 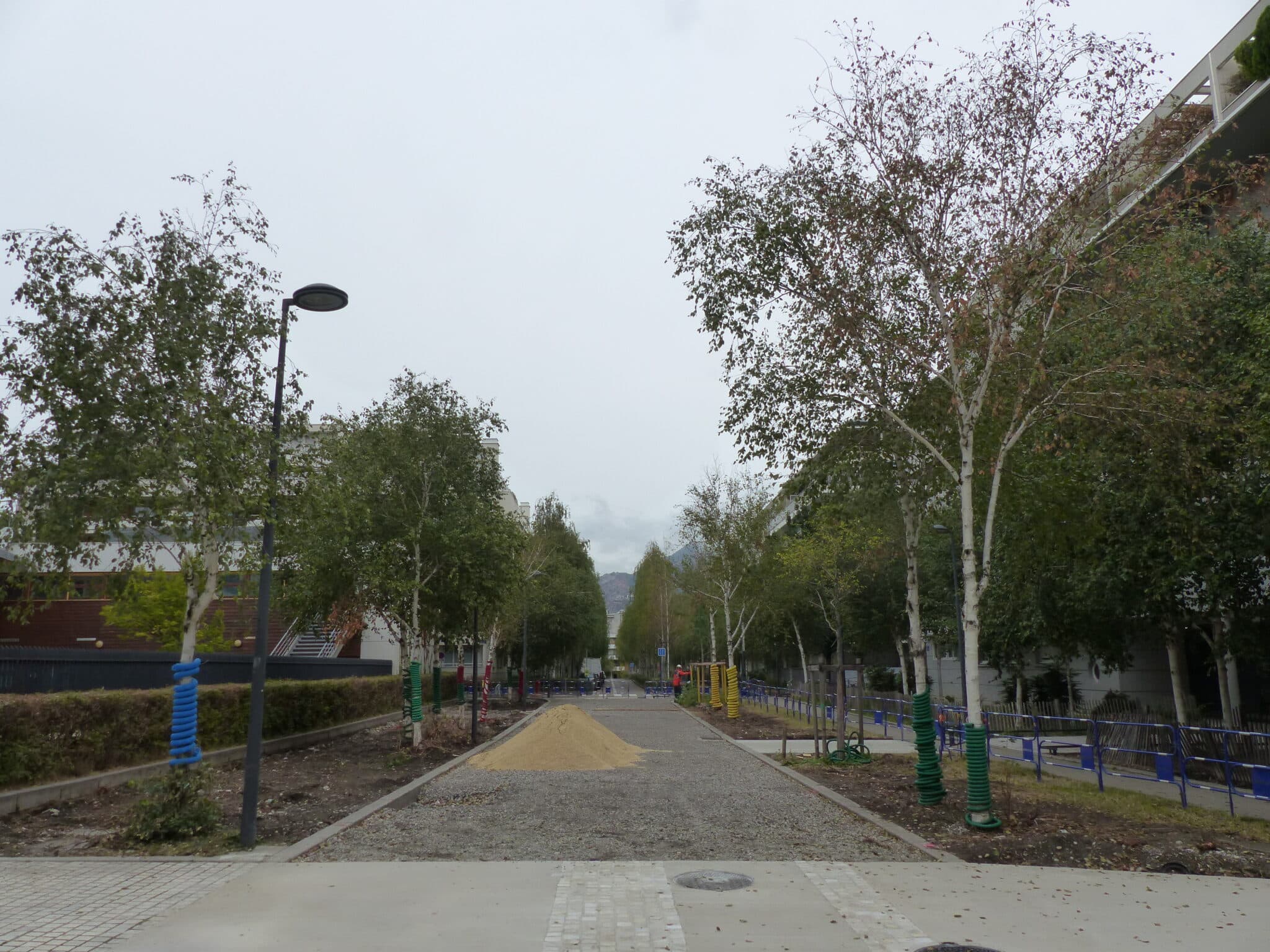 At the foot of the birch rows, 300 m² of sanded surface will be applied to this part of the Allée des Romantiques to allow better water infiltration. © Benjamin Houry – Place Gre’net

A new alley that is no longer designed for the exclusive use of children, but as an intergenerational meeting place. However, residents have told their elected officials that they do not want this development to become a meeting place.

A parking report has been carried out at district level: In the Villeneuve-Musée district, the number of places under the buildings exceeds the needs of the residents “, notes Gilles Namen.

The municipality therefore wants to make the neighborhood car-free and thus encourage softer forms of mobility, such as the use of the bicycle. ” The Allée des Romantiques was a double lane, then transformed into a one-way lane with a bike path, is closed today », says Katia Bacher. 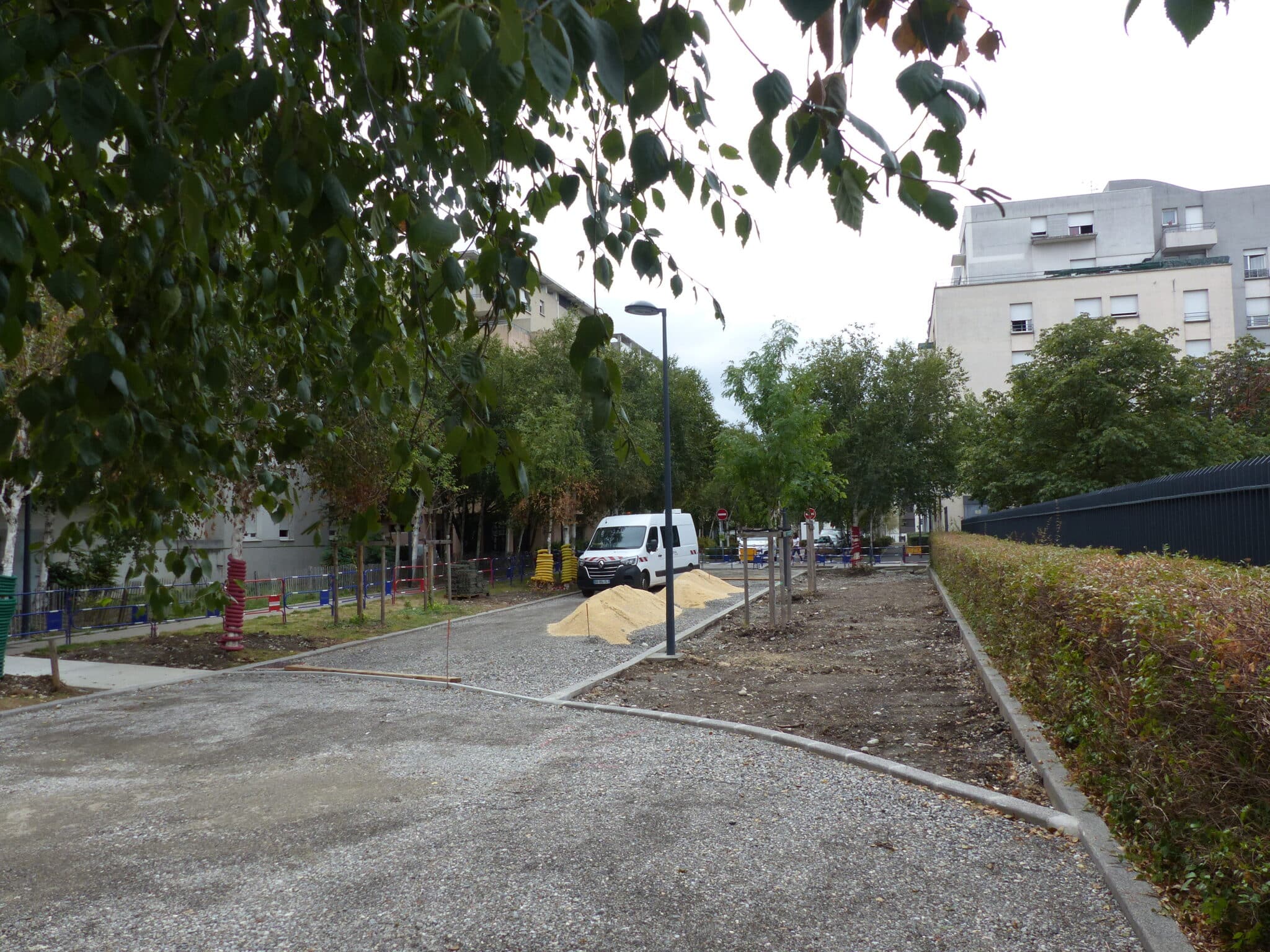 On this part of the Allée des Romantiques, the sidewalk is widened to allow more pedestrians to pass through and to allow harmonious coexistence with bicycles. © Benjamin Houry – Place Gre’net

Parents dropping off their toddlers before Reynoard’s kindergarten will now have to stop at the drop-off points, located at the ends of the Allée des Romantiques. And the elected official adds that the aim is to: “work to change habits, teach children to cycle or walk” ».

What bicycle parking at neighborhood schools? At present, some institutions do not have the necessary accommodation. The town hall therefore wants to install bicycle hoops and scooter hooks, but wait until the practice becomes more democratic before taking action. It remains to be seen whether it will be possible to generalize the practice without first solving the parking issue.