The end of the week leads to a sell-off in the cryptocurrency market, which is responding with declines in risk aversion ahead of Jerome Powell’s speech at the Jackson Hole conference. Digital assets are again correlating with contracts on US indices, where sentiment is weakening ahead of the session’s opening:

The average bitcoin blockchain purchase price (realized price) is currently around $21,700, bitcoin has been unable to stay above this level, signaling weakness historically. Worth mentioning is the so-called price delta, which calculates the difference between the realized price and the historical average price of bitcoin. Currently, the price delta is at the $13,700 level, which may prove to be the bottom of the current bull market also due to the strong technical support that is at these levels (including the top of the 2019 bull market). In the past, bull markets have often stopped the declines only after reaching the “delta” in price. Source: Glassnode 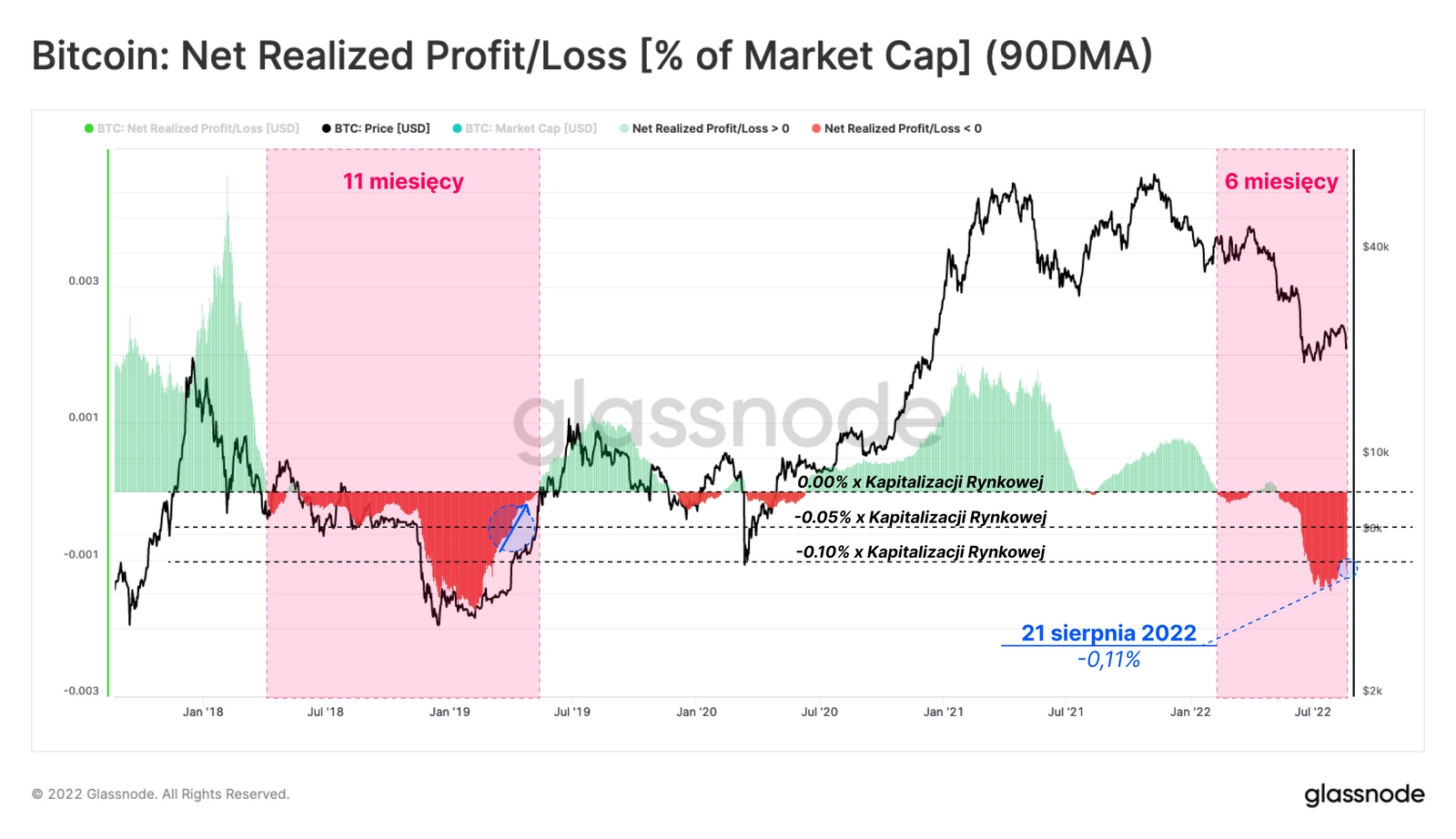 Investors in the bitcoin market are poised for net losses despite the cryptocurrency’s massive sell-off this year, illustrating the market’s continued lackluster sentiment towards risky assets and vulnerability to external risk factors. By tracking the 90-day moving average, we can see that cryptocurrency prices tended to settle only when the number of sellers turned out to be low, but the sell-off continues, as confirmed by the sell-off on 21 August. The market is dominated by short-term investors with a lower degree of conviction and sensitivity to market volatility. Source: Glassnode

The Fear and Greed index hints at fear, but extreme levels are still relatively far off, leaving ample room for the weakening sentiment to continue in the event of further declines. Source: alternative.me

“This material is marketing communication within the meaning of Article 24(3) of Directive 2014/65/EU of the European Parliament and of the Council of 15 May 2014 on markets in financial instruments and amending Directive 2002/92/EC and Directive 2011 /61/EU (MiFID II) Marketing communication is not an investment recommendation or information that recommends or suggests an investment strategy within the meaning of Regulation (EU) No 596/2014 of the European Parliament and of the Council of 16 April 2014 on market abuse (Market Abuse Regulation) and repealing Directive 2003/6/EC of the European Parliament and of the Council and Commission Directives 2003/124/EC, 2003/125/EC and 2004/72/EC and Commission Delegated Regulation (EU) 2016/ 958 of 9 March 2016 supplementing Regulation (EU) No 596/2014 of the European Parliament and of the Council with regard to standards, regulatory techniques with regard to the technical modalities of objective presentation of r bel ing recommendations or other information that recommends or suggests an investment strategy and for the disclosure of special interests or indications of conflicts of interest or any other advice, including in the field of investment advice, within the meaning of the Act of 29 July 2005 on trading in financial instruments. (i.e. Journal of Laws 2019, item 875, as amended). All information, analysis and training provided is for informational purposes only and should not be interpreted as advice, a recommendation, an investment solicitation or an invitation to buy or sell financial products. XTB cannot be held responsible for its use and the resulting consequences, as the final investor remains the sole decision-maker with regard to the position taken on his XTB trading account. Any use of the said information, and in this regard any decision taken with regard to a possible purchase or sale of CFDs, is the sole responsibility of the end investor. It is strictly forbidden to reproduce or distribute this information in whole or in part for commercial or private purposes. Past performance is not necessarily indicative of future performance, and anyone acting on the basis of this information does so entirely at their own risk. CFDs are complex instruments and carry a high risk of losing capital quickly due to leverage. 81% of retail investor accounts lose money when trading CFDs with this provider. You need to make sure you understand how CFDs work and that you can afford to risk losing your money. With the Limited Risk Account, the risk of loss is limited to the invested capital.