There is laughter from the stable of Château Soutard, located in Saint-Émilion. The five interns wait around a cup of coffee while their horses finish eating. Today they start a new training day “ development » : 140 hours of meeting three to four days a month to learn all about draft horses.

The National Winegrower’s Horse School trains its own horses, receiving them at a very young age, often rescued from the butcher shop. In France, this type of horse is mainly bred for meat. But consumption is declining, this school represents new outlets for breeders. According to a survey conducted in 2020 by the French Institute of Horses and Equestrianism and the French Institute of Viticulture and Wine Use, nearly 300 winegrowers (from more than 80,000 wineries) used horses on their plots. But 63 % of them had to rely on external service providers, not their own animals. Hence the interest for these interns to learn to deal with these animals autonomously.

A draft horse of the Percheron breed on the estate. © Alban Dejong / Reporterre

Although they come from different backgrounds, the students share a common passion: growing the vine. They feel the need to return to nature and want to preserve the soil. Charles, for example, is the manager of an estate in Bergerac. Recently switched to organic, he wants to demechanize as much as possible and prefer quality over quantity: “ I want to return to something more human, more in touch with the vine. »

The same goes for Serge, farmer: “ I have horses for my free time, but I wanted to spend more time with them, connect my two passions. Integrating animal traction on my farm is in line with my job and my values: no noise, no diesel, it’s more virtuous. I do not intend to remove the tractor, but to reduce its use. » 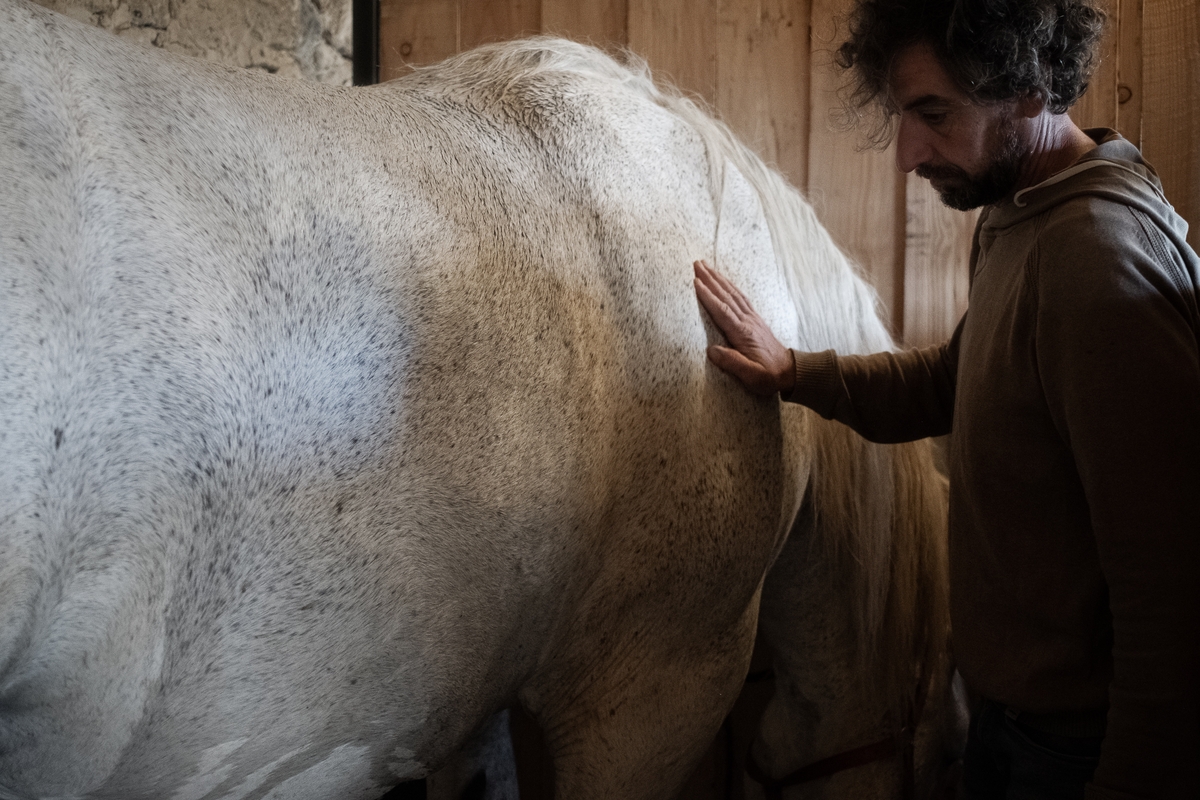 First of all, you have to practice. The morning is all about plowing between the vines. The interns use the school horses: Barbara, a Percheron, and Hector, a Breton. Two animals who know their craft perfectly and allow students to learn in the best conditions. The preparation is collective, conducive to pedagogy and the memory of the base under the watchful eye of Franck, the trainer.

Make every adjustment correctly, put every girth in the right direction… It is essential to tighten your horse correctly to avoid injuries. After a final assessment of the tools, move to the field to be worked. The group splits in two. One part stays with Barbara to play the record, another part with Hector to try his hand at the scrapper, the most physical and technical work of working the vines. 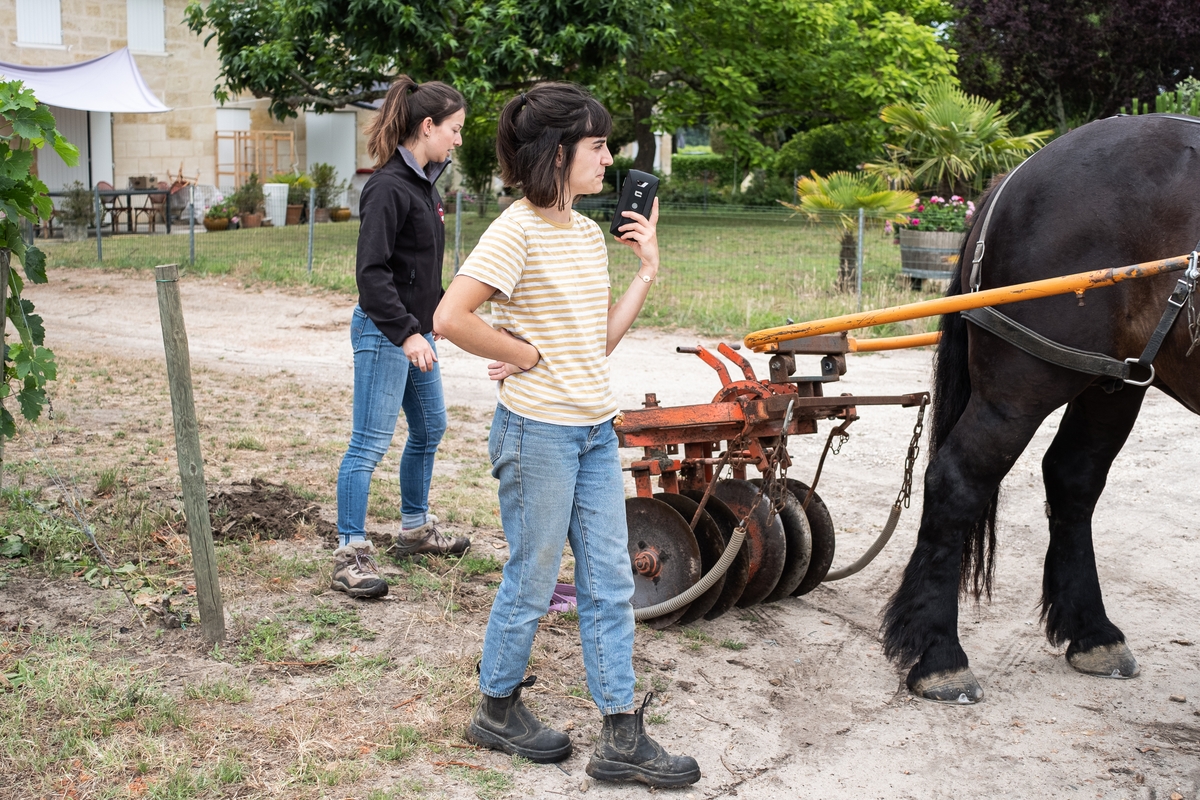 Margaux and Inès, students in training, are about to play the disc in the vineyards. © Alban Dejong / Reporterre

The stripper is a traditional tool used to weed around the vines. Its use is much more physical than the tractor, but no less delicate. It allows you to go much deeper into the earth. “ The horse has learned to stop as soon as it feels resistance so that it does not tear off the foot, unlike a tractor which can tear off an entire row in the event of a technical failure. » explains Frank.

Charles lends himself to the exercise. “ Hector, run. »Both hands on the tool, Charles leads it between the vines as Hector walks forward, adjusting to his leader’s rhythm. “ Hector is a great horse that knows how to adapt perfectly to the person he has behind him »notes Frank. 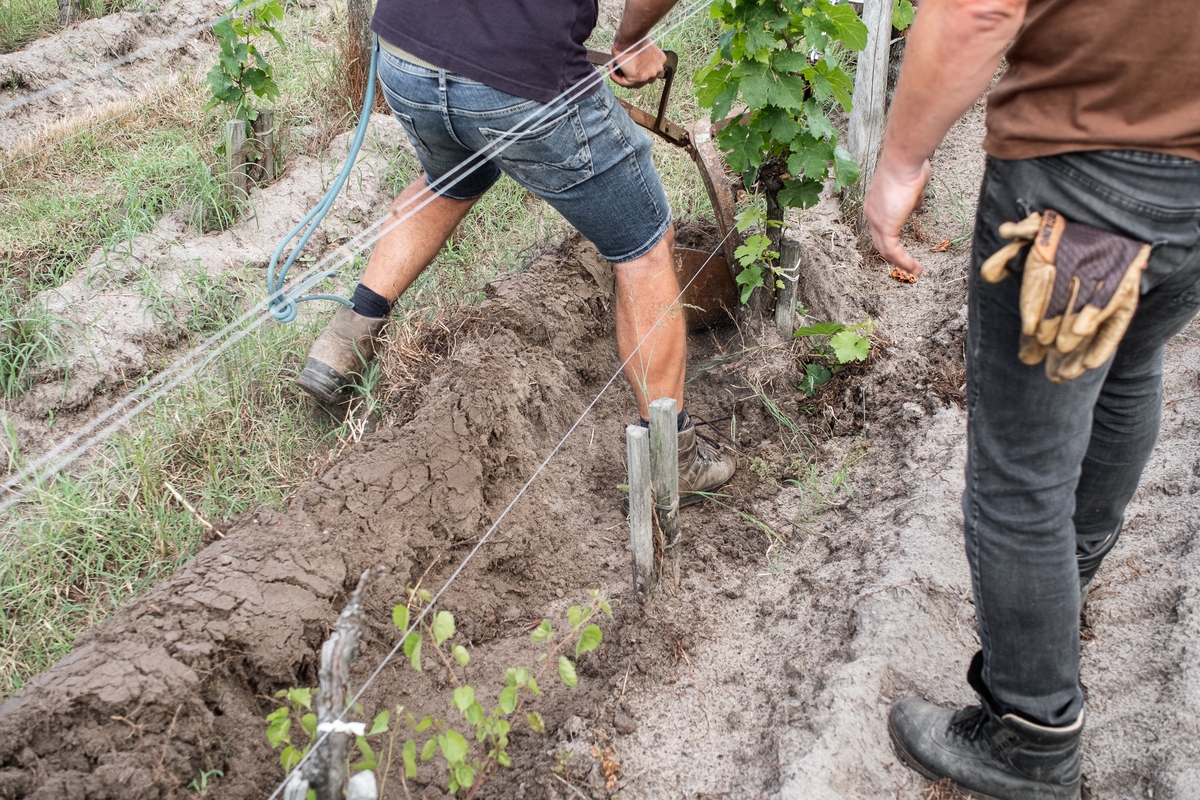 At the other end of the line, Inès and Margaux are with Barbara to spin the plate. A tool that allows you to level the ground that has been raised after passing the excavator: “ The difficulty here is to keep the same tension on the reins so that the horse goes perfectly straight. »explains Ines, “ if it deviates a bit, it risks hitting a line. »

As a versatile collaborator in a biodynamic domain, Inès wants to reintroduce this activity, an approach she finds much more respectful of nature. Horses cause less nuisance and respect the ecosystem more than tractors, which can compact the earth and emit a lot of greenhouse gases. It also makes it possible to work on fields that are sometimes inaccessible to the tractor. 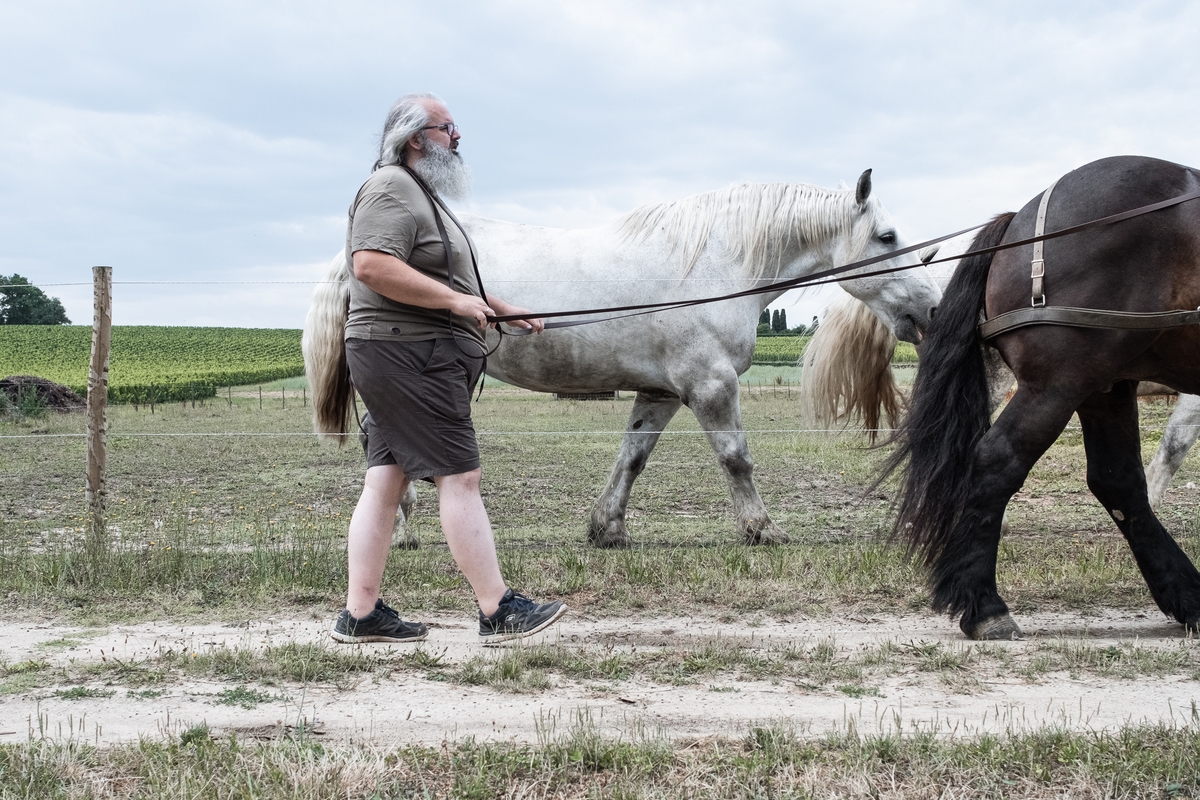 For the French Association of Working Equidae (SFET), bringing working equines back to the heart of French society could contribute to “ a positive evolution of our economic and social system ». An evolution that would make it possible to limit the use of fossil fuels and which, by connecting the horse deeply to it, would also change the relationship with the vine.

Besides the horse school for winegrowers, it also created the school for horticultural donkeys. Finally, in the autumn of 2022, the National School of Territorial Horse will see the light of day in the municipality of Hennebont (Morbihan). It will be dedicated to municipalities that want to use horses, for example, to collect waste or maintain green spaces. . 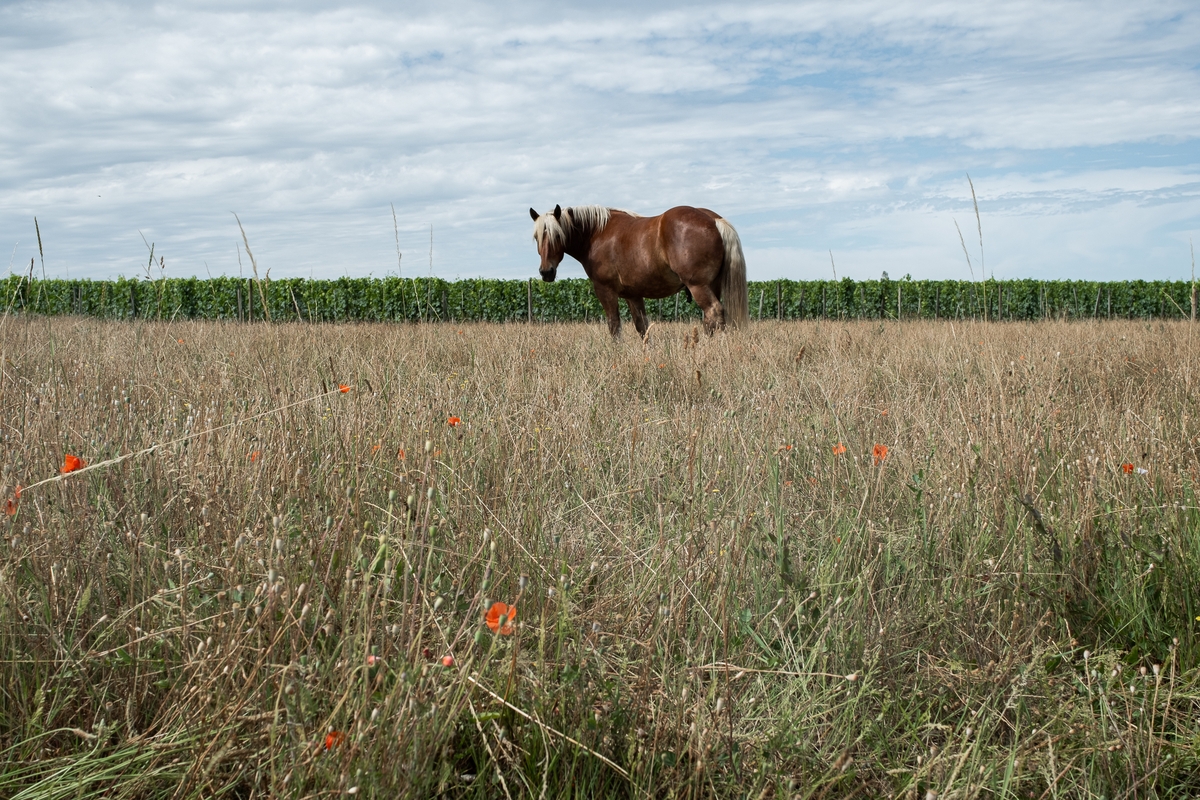 Once the training of the horse school is completed, the trainees can buy one of the horses from the school if they wish. Inès is especially a fan of Inuit, a young man from Comtois who sees her integrate well into the field in which she works.

This small group will meet until October before they can work in pairs with their horse, far from the buzz of the machines, independently in the silence of the plots, to return as close as possible to the vines. 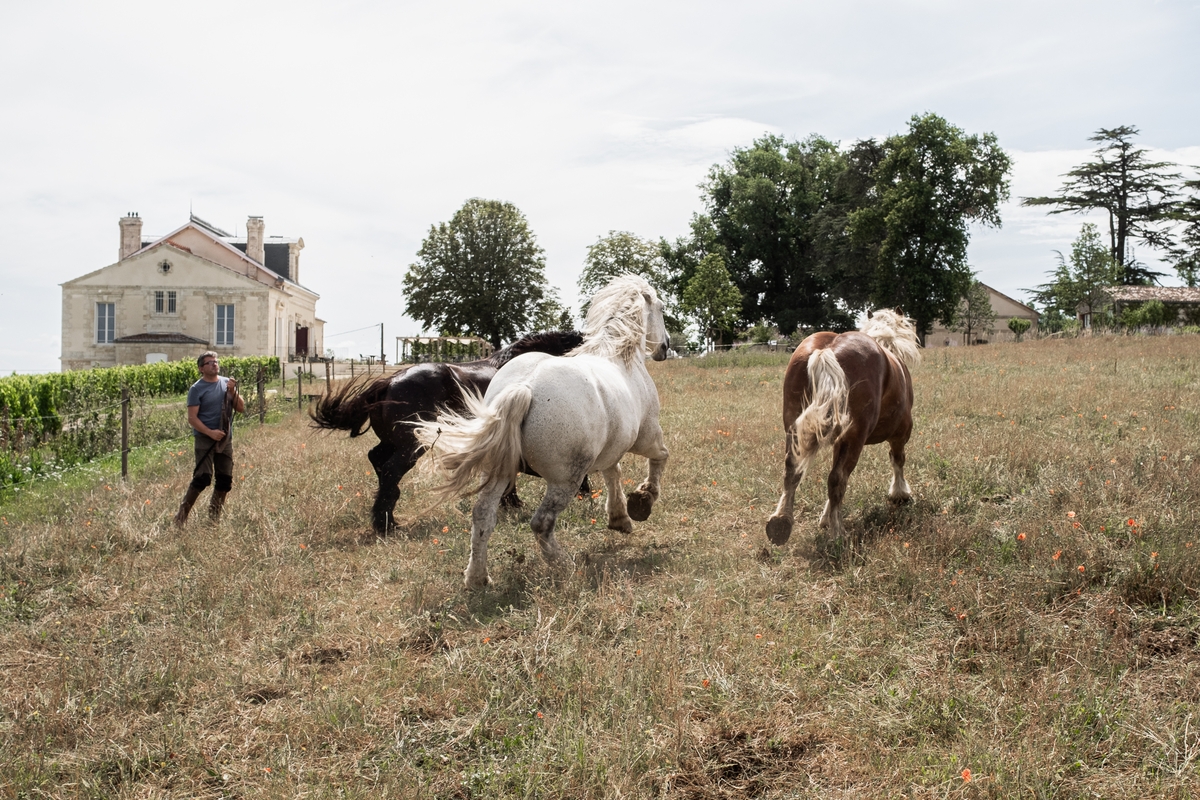 Our report in pictures: 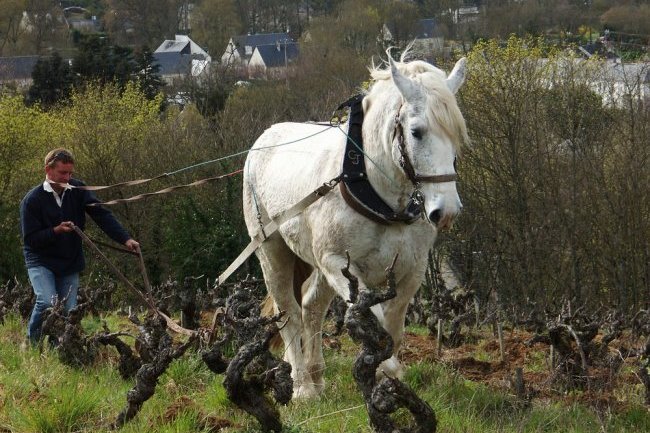 The vine to the rhythm of the hooves