It was no longer possible to miss the experience of the moment. Since Mark Zuckerberg formalized the transformation from Facebook to Meta in late October, there has been no more dragging your feet. We, in turn, had to dive into the metavers. The parallel world promised by the social network is boiling Silicon Valley. Irritating, fascinating, the object intrigues as much as it irritates, just like its creator… But is it a real novelty? At the invitation of Sia Partners, a digital transformation consultancy that studies its use for its clients, we went through the doors of the metaverse to get our own idea of ​​it.

This Thursday, December 6, we found the avatar of our editor-in-chief, Pierre-Henri de Menthon, in a virtual meeting room, Meta’s “Horizon Workroom”, along with another guest. Each is installed in a different room of Sia Partners’ premises with a virtual reality helmet on their forehead. Within minutes we are teleported to an alternate reality. A large office open to nature. The scenery by the windows is reminiscent of the peaceful valleys of the Jura, smoking chimneys and a lake in the distance. An enchanting video game atmosphere, to which, despite a rather playful first look, we still need a few minutes to adapt.

Overall, the experience isn’t much different from a typical VR simulation. Our avatars have no legs, so our digital twins float above the ground, almost as light as Mark Zuckerberg on a surfboard. To date, the consumer headset marketed by Meta for $300, the Oculus Quest 2, can reproduce the movements of the hands and the expression of the face using the integrated sensors, but it cannot yet cover the entire body. scanning, explains Agathe. Malinas, the director of the agency Nod-A.

“It’s only a matter of time,” said Matthieu Courtecuisse, the director of Sia Partners, who attended the experiment. Mark Zuckerberg’s group is already studying the possibility of donning a full suit, ReSkin, to feel sensations even in the metaverse. This double skin is based on the detection of magnetic signals, intercepted by an artificial intelligence. Unveiled in October, the “elastomer” invented by Meta should make it possible to further enhance the sense of immersion in this parallel world and make the experience even more addictive for users. 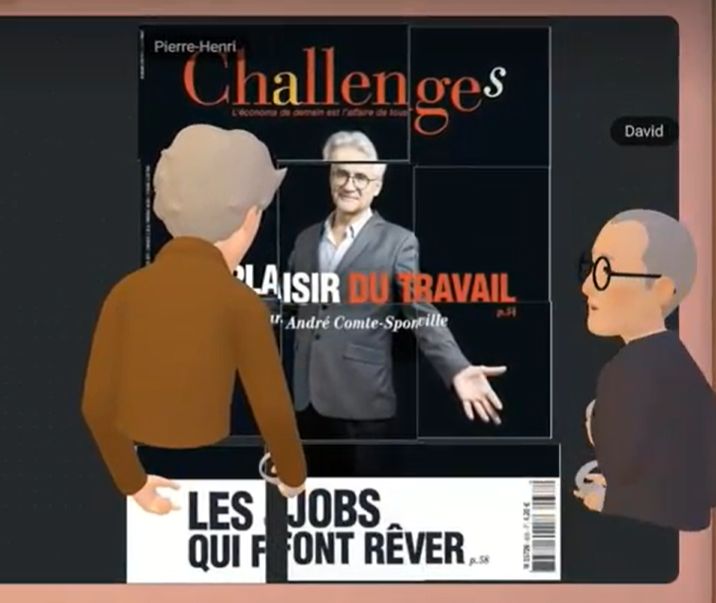 At this point, each of us is assigned two simple joystick-shaped controllers. They will be used during the experiment to write and manipulate objects. But also to go from one point to another in a decor personalized with the logo of Challenges. Actions are limited at the moment. We go there by clicking floating buttons. The spatialization of sound works wonderfully, maintaining the illusion of natural conversations from one end of the room to the other. As for the feeling of discomfort (“Motion Sickness“), sometimes felt during virtual reality demonstrations, it is relatively absent. At least, for half an hour spent in the metaverse.

Ultimately, Mark Zuckerberg wants to integrate all applications developed by the group into the metaverse: from instant communication (WhatsApp, Messenger) to social networks (Facebook, Instagram), via online commerce (Shops). The “store” integrated into the helmet by Meta gives access to various applications, which the user can open from his Facebook account for about twenty dollars. An offering dominated by entertainment applications (Beat Saber, Job Simulator, etc.) and a few rarer features intended for businesses, such as Smarsheet (an online work platform).

Companies, let’s talk about it. In France, Accenture, Orange and Renault have already purchased several headsets to introduce their teams to VR. Event groups are interested in it for their post-pandemic conventions; fashion brands, to exhibit their new collections. And who knows, one day parade models with virtual coins, authenticated on the blockchain? Creations that can be put online in the form of NFTs and sold using cryptocurrencies in points of sale based on the e-commerce model. In short, the use cases are varied. And the increasingly numerous bridges between the two worlds.

“To make this transition, Facebook will have to take inspiration from Apple, Matthieu Courtecuisse notes. After cutting the prices of VR headsets, Meta will need to secure the rest of the value chain, from hardware to device market that it powers. currently not checking.” The metaverse is far from fulfilling all of Mark Zuckerberg’s promises. Its competitors, such as Microsoft’s “Mesh” platform, offer more hybrid experiences, combining augmented reality and virtual experience. A less invasive solution than a VR headset, immersing the user in a total illusion.

Microsoft’s “mixed reality” headset, the HoloLens 2, thus simulates holograms in the user’s field of view rather than transporting him to another world, giving him the choice of appearing as an avatar or as a human, depending on his preference. At CES in Las Vegas, the group announced Monday that it is working with electronic chip designer Qualcomm to integrate its SnapDragon technology into future Microsoft glasses. Ergonomic and less heavy than current helmets. A market that will certainly determine the future of the metaverse. EWhile waiting to “build the next chapter” with Mark Zuckerberg, we found our newsroom and said goodbye to our digital doppelganger. Until the next appointment…

Read alsoMeta flees his past for a future lost in advance