Especially after Fender invited us to the Stratoverse earlier, it’s our turn Wampler Pedals to take us to the metaverse† But here it is not a virtual world but the last pedal devised by Brian Wampler which comes out after several years of development. The Wampler Metaverse is a digital pedal but it remains of a relatively compact size, on the order of a standard double pedal (114 x 95 x 56 mm), while not only having 11 vintage and modern delays, but also multiple functions: choice from full stereo or mono and MIDI control with the necessary connectors, 8 presets on the pedal and 128 via MIDI or even a dedicated port to control the parameters via an external expression pedal.

Instead of a screen and scrolling menus, Wampler opted for a relatively simple and self-explanatory interface. We first choose one of the 11 delays and then make the settings via the Delay knob to adjust the delay from 25ms to 2000ms, Feedback which determines the number of repetitions, and Tone to create a more or less serious frequency range/acute. to have. You can also add modulations according to the chosen delay, and the Mix knob doses the mixture of the Dry signal and the Wet signal, but it can also act as a master volume by removing or adding 6dB. At the rear, the Trails selector determines whether the pedal operates in True Bypass or Buffered Bypass.

The Bypass button is used to activate or deactivate the chosen effect, as well as when pressed to access secondary functions such as Rhythmic Breaks, Tape or Ethereal mode, depending on the type of Delay that is active. The Tap Tempo button adjusts the delay on the fly and also allows you to select a preset with your toe (green LED after long press). You can also do it with your fingertip via the central Preset/save button which is also used to save the settings on the machine. 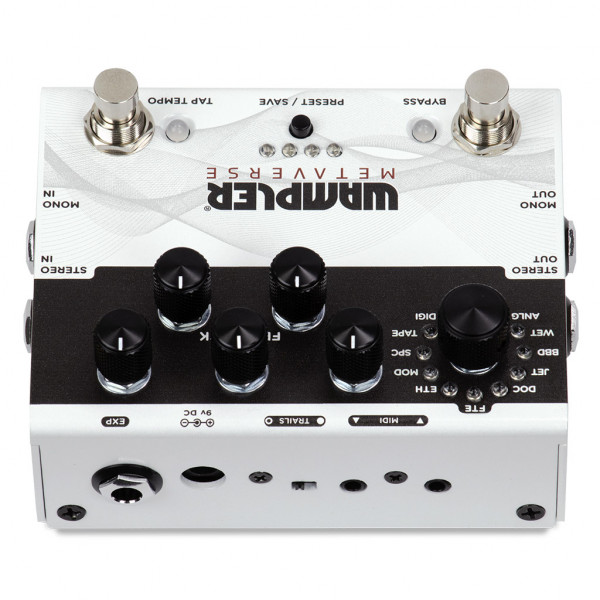 But we can’t save to a computer because the Metaverse doesn’t have a USB output. It will therefore also be impossible to make future updates, which is a bit of a shame for a digital pedal… And it’s all the more strange that for every purchase of a Metaverse pedal, the equivalent is offered in plug-ins ( AU and VST3 sizes worth $49). We would have loved to have exported presets from one format to another. Another drawback, it’s not 1 Metaverse plugin but 11 that has to be loaded 1 by 1 … A bit annoying I have to admit, but if you are convinced by the sounds in this Wampler Metaverse, it sure is worth the effort . The price is announced at $350 with a 5 year warranty for this US made pedal.