Imagine the early 20th century. Just like the schoolchildren of that time, you walk across the yard before class day. The School Museum, in Monastier-sur-Gazeille, offers a journey through time. A guaranteed change of scenery. The visit to the site actually starts with the shop, installed on the site of the former theater hall of the brothers’ school.
Once passed under a red curtain, one finds oneself in the middle of an astonishing mess that gives a taste of the classrooms one will not long discover. Rooms that smell of wood, paper and purple ink. In this shop you will find all the writing utensils of yesteryear, starting with pens and slate pencil holders.

“A century ago there were more than 5,000 different nib models, but schools mostly used the Sergeant Major nib,” says Janet Darne. Without her and René, the master and mistress, dressed as before, gray blouse for him, black for her, this place probably wouldn’t have the same charm. It must be said, the couple is not content with opening the doors of their museum, but helps to animate it, as during the last visit of the school year that will take place this Tuesday for schoolchildren from Coubon.

It is a mandatory blouse for the boys, an apron for the girls

“We are often asked whether we were in National Education. If that had been the case, we probably wouldn’t have wanted to keep evolving in the same environment,” Janet laughs. She is of English descent and taught the language of Shakespeare in a vocational training for adults. She was also a guide. He was a farmer in the Loire, passionate about the world of school. He found his calling in his retirement. 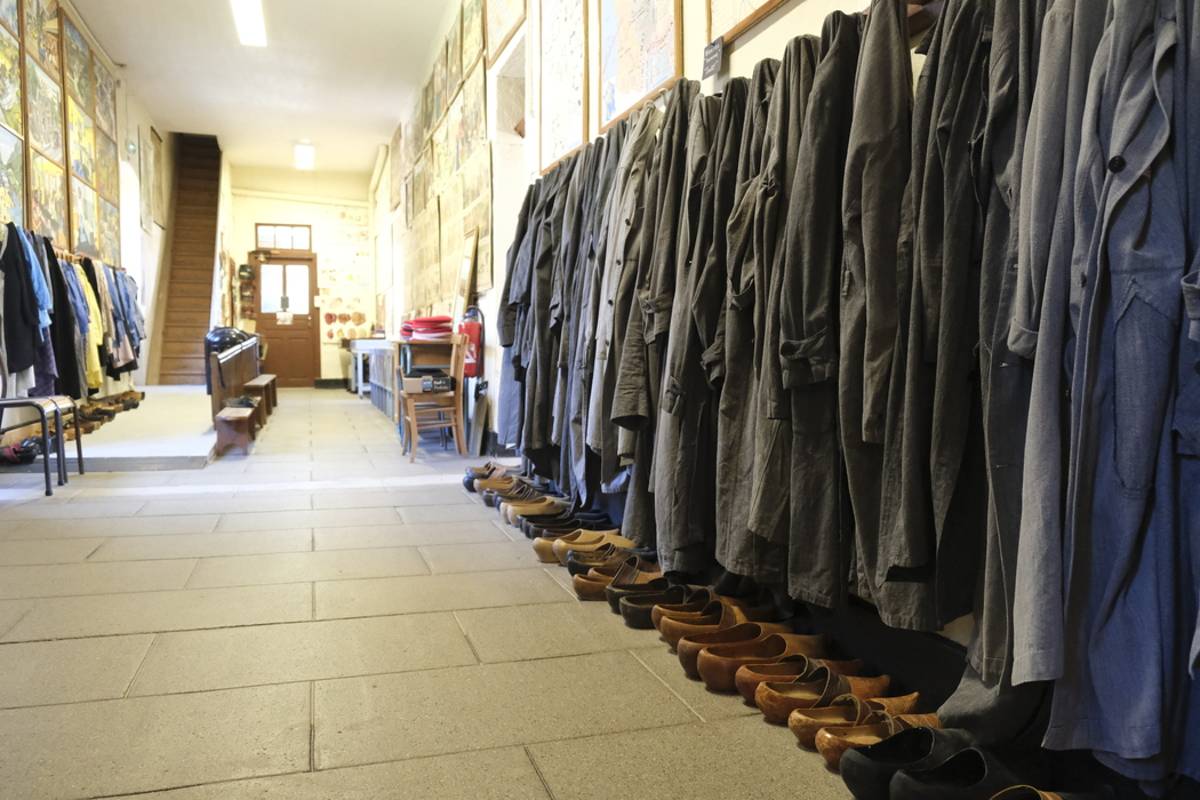 Schools from the Haute-Loire, Saint-Étienne and even Lyonnais for the most distant came this school year to immerse themselves in the atmosphere. There is no wise parading for the works here. The visit is participative. And for starters, it is an obligatory blouse for boys, an apron for girls, clogs and berets for everyone.
The museum works with a neighbor, Rachel, who walks donkeys. The school children are generally divided into two groups, one takes care of the animals while the other is in the museum. The activities are in reverse order throughout the day. The School Museum offers activities of at least four hours. 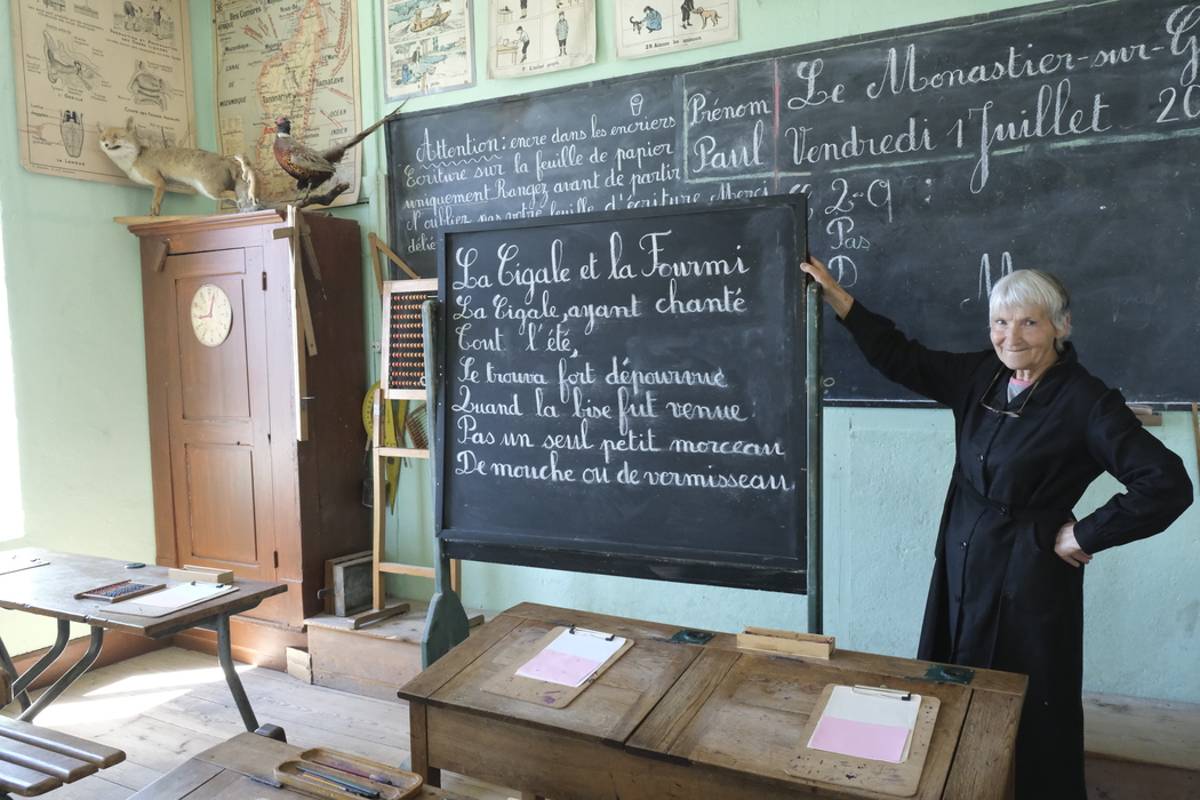 Opposite the museum shop, a picnic area has been set up in the former refectory of the school. This is where the “debriefing” usually takes place. It’s like an airlock before the time machine is activated. And off we went, we followed the path of schoolchildren of yore who admired the walls lined with colorful maps by Vidal de la Blache.

Handle the pen and the abacus

A collection of some 4,000 advertising blotters, some of which surprise with their audacity by “advertising” burgundy wine or martini. This comes as no surprise to Janet Darne: “Until the early 1960s, she says, children were allowed to drink a little wine at school.” Further on, other posters praise the practical work given to boys and reserved for girls who were willing to become perfect housewives and wives.
Oh well, but what are these wooden boxes? Our guide enlightens us by manipulating what is in fact a school bag, one of which had belonged to René Darne’s father-in-law.

The collections are the fruit of porcelain made by René Darne, with their old photos, maps, objects.

Upstairs, the long corridor leading to four classrooms has become an exhibition space. Again, posters of natural sciences or on the human body along the walls. The eye lingers on the beautiful collections of cases, nibs and sharpeners. The classrooms are also transformed into exhibition halls. 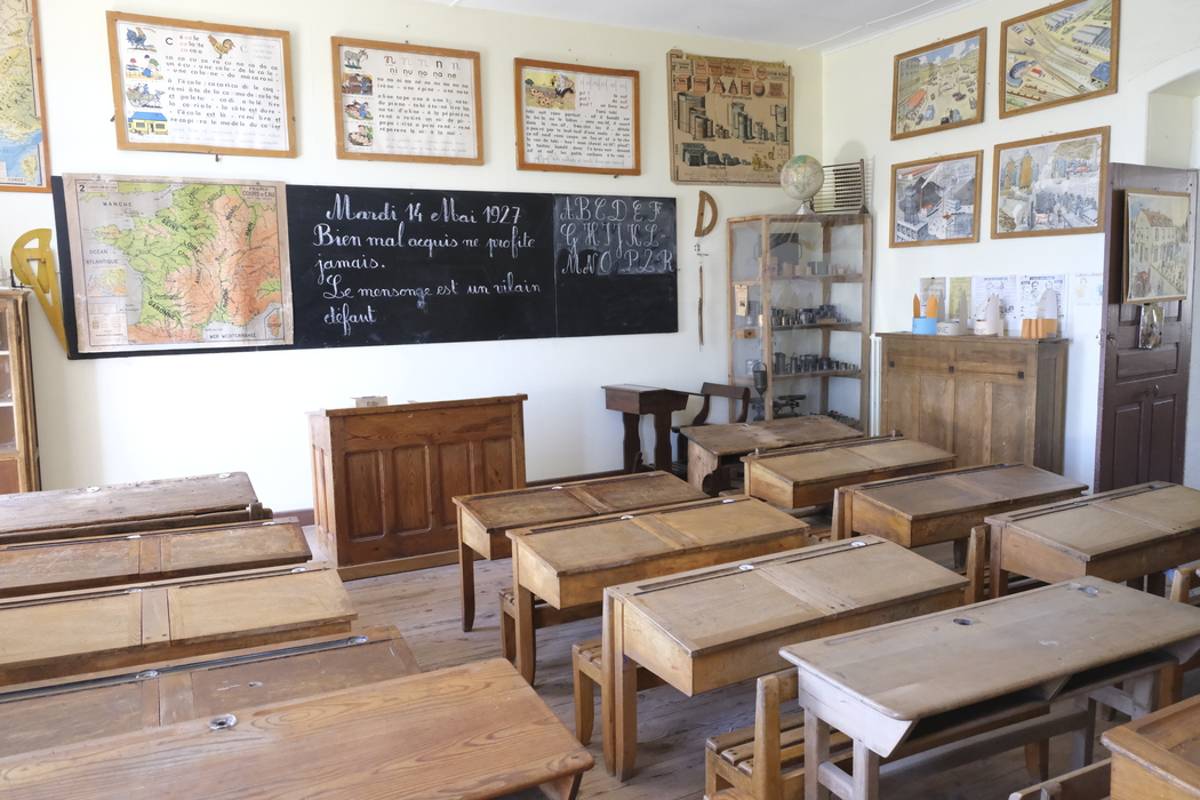 Place in one of them for “practical work”. Materials are waiting for the visitor on the school benches: square sheets, a pen holder and an inkwell. He will have the right to leave a passage from La cigale et la fourmi with his writing surface on which he will have his first and last name marked, before dictating. The first manipulations of the tool are a bit clumsy with this pen that is one with the paper, but is eventually tamed. After a few words, upward and upward movements are much smoother. Let the less daring reassure, everyone is entitled to the adjustable dunce’s cap, patented by the master himself. In the land of Modestine, it would take more to move the visitor.
The abacus, which has disappeared from our schools, is still used for events in the museum. The master became attached to the Russian-inspired instrument with its tens, hundreds, thousands… Enough to make us agree with the calculations and even the most complicated ones. Count to half an hour of class. Strangely enough, we forget the time. René Darne assures us: “We don’t learn the abacus anymore, except in Monastier. †

The couple is still looking for the site, which opened in 2013

They opened a museum to occupy their retirement, strive to hand it over today and yet Janet and René Darne left for another tourist season. 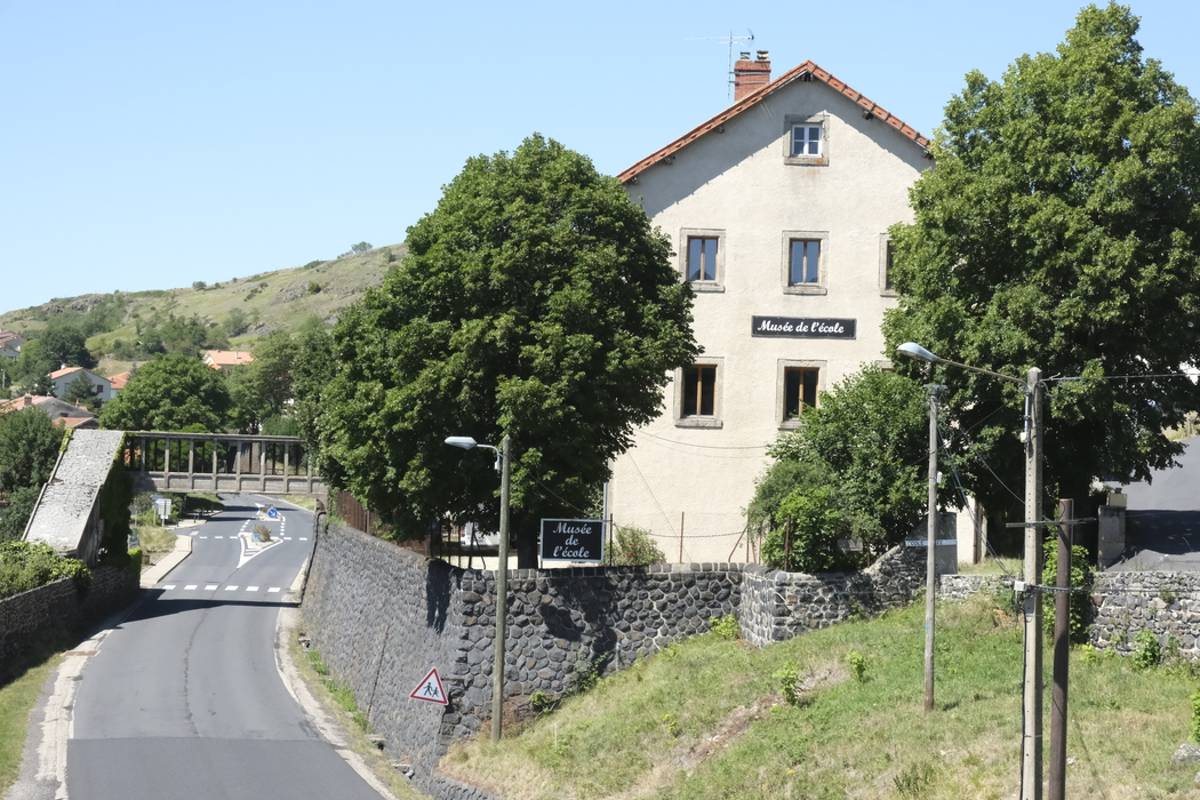 The site of the old school shared by the Transcévenole.

When we met him in 2020, the couple in their 70s, owners of the School Museum in Monastier-sur-Gazeille, was looking for a buyer.
Since then, several people have expressed an interest in the building and the rich collections it houses, but for now, negotiations have stalled. The economic and social context is hardly favourable. Still, things are going pretty well. The museum welcomed some 8,000 visitors in 2019 before the pandemic disrupted the school environment and cultural life in general. René Darne makes sure that the School Museum, which he created from scratch ten years ago, is more than appreciated by visitors to Auvergne-Rhône-Alpes, the largest contingent of people crossing the doors of this old house that dominates the deviation of Monastier-sur . -Gazeille, axis that borrows the old route of the Transcévenole.
An imposing 1,400 m² house, which incidentally was a former private boys’ school that opened in 1896. When the building was put up for sale by the community in 2012, the Darne couple knocked on the doorstep to preserve the heritage of the town of Saint-Chaffre. The owners were inspired by Clémence Fontille’s school, the Margeride ecomuseum in Ruynes-en-Margeride, dedicated to the school of yesteryear.
The couple wanted to do something much bigger in Le Monastier. A large part of the collections is made up of pieces that were found at Le Bon Coin over the course of a year. The museum was able to open in May 2013.