Objective: redesign of the public space between the Simone Veil esplanade (station bridge) and the intersection of rue Foch and avenue de Verdun.
Urban challenge: remove the discontinuity between the heart of the city and the commercial center of rue du Maréchal Foch to give a unit of treatment to this sector composed of 3 different spaces:

Started in April, the total duration of the project is estimated to be between 10 and 12 months.

The third phase of development work will start on Monday, July 4, for an estimated duration of 13 weeks. It will be about:
– the sector of the war memorial: implementation of deactivated concrete (between mid-July and the end of July, depending on the weather),
– the sector of the Charles de Gaulle school and the 19’Cent hotel: earthworks, works on the networks and installation of the borders,
– the sector of the CPAM of Saône-et-Loire and the Maison des solidarités: laying of concrete pavers.

Throughout the duration of the works, access to shops and services will be preserved and materialized by pedestrian traffic corridors. Signage will be installed and adapted in function of the progress of the works.

As for the traffic:

– rue des Martyrs de la Liberation will be open to traffic from Monday 4 July: a temporary roundabout will be marked at the intersection of avenue de Verdun and rue des Martyrs de la Liberation,
– the system of flashing amber lights will be maintained at the intersection between rue Maréchal Foch and avenue de Verdun,
– Rue Anatole France will be closed to traffic. A diversion is being set up.

– the Foch Verdun stop is temporarily moved to the François Mitterrand stop on the Simone Veil esplanade.

For more information and any comments regarding the works, please contact the city community’s toll-free number: 0 800 216 316.

Reminder of the project
The Foch-Verdun project responds to the ambition to improve the function, comfort and well-being of public space. More beautiful and more natural public spaces that meet the new needs of users, but also public spaces that form a clear link between the eastern and western parts of the city.
This project foreshadows and anticipates the wider transformation of this sector on themes such as renovation, densification of housing and improvement of commercial attractiveness. It is also about setting up a green network, taking into account the need to live better, strengthening the notion of nature in the city and developing inter-district connections through the development of soft mobility.
The requalification of this sector aims to:
• Provide real urban continuity between the station and the Foch-Verdun district,
• Facilitate and improve access to shops in rue du Maréchal Foch,
• To improve walking areas,
• To provide consistency and continuity in the development of soft mobility,
• Improve the flow of vehicles between the Simone Veil esplanade, the rue des Martyrs de la Liberation and the avenue de Verdun.
More generally, this operation is directly related to the objectives of the “city heart” action, namely:
– Continue urban development works for the city center
– Strengthen the attractiveness of the city center by enhancing the local heritage and modernizing centralities
– Strengthen the presence of nature in the city and develop a landscape approach for public space and urban forms

Dilute Avenue:
– Two lanes and bilateral parking
– Widening sidewalks with plantation integration
– Construction of a two-way bike path on the school side

Sector Foch-Verdun:
– Development of a simplified platform traffic light intersection
– Creation of a pedestrian platform “zone 20”
– Creating forecourts to enhance storefronts
– Development of a two-way cycle path on the shop side
– Reversal of traffic on rue du Grenouiller (downward direction).

Nature in the city: significantly improving the ecological potential of public space
The development of the Foch-Verdun sector is part of the continuation of urban development projects carried out by the urban community, which aim to revitalize the city center of Le Creusot by creating a real backbone between Place Schneider, the esplanade François Mitterrand and the Foch-Verdun sector.
Through this operation, “better living” is strongly developed with the desire to carry out works taking into account a set of regulations and building principles, aimed at the development of nature in the city and the preservation of the environment.
More than a change of image or a simple beautification of the public space, the project pays attention to the quality of the living environment and the notion of urban well-being. Based on these general principles, the development guidelines aim to:
– To increase the ecological potential of public space tenfold, in particular by improving the soil permeability coefficients and the biotope coefficient per area,
– Improve well-being comfort in public spaces by improving the environmental framework (planting 52 trees), by combating heat islands (the ecological potential linked to solar radiation will be improved by 72%) but also by making them safer, more readable and more attractive.
Green spaces represent 15% of the area of ​​the project: new massifs will be created to replace the Charles de Gaulle roundabout and the directional islands in the lower part of the Avenue de Verdun.
In addition to their traditional functions (circulation, connecting and meeting spaces), the qualities of the public spaces contribute to the identity of the project and its environmental quality. The layout takes into account their durability and ease of maintenance and maintenance.
Soft modes of transport are favored by the modal distribution of the road network (separate pedestrian, car and bicycle traffic). The cycle path provides a more direct proximity between the various residential centers, public services and shops. The roads integrate alignment plantations that accentuate the space and shrubby plantations that allow to decorate and separate the different circulations.
Rainwater runoff into the network is limited by the creation of landscaped valleys that contribute to the environmental quality of the site. To reduce energy consumption, a public LED lighting system is installed.

A requalification project supported by the European Union, the State and the Region

The estimated cost of this urban development project is estimated at 2.43 million euros including taxes, with the participation of:
– the European Union, within the framework of the European Regional Development Fund (ERDF):
€436,648
– the State, under the Local Investment Support Grant – DSIL (€410,000)
– The Bourgogne-Franche-Comté region (€400,000). 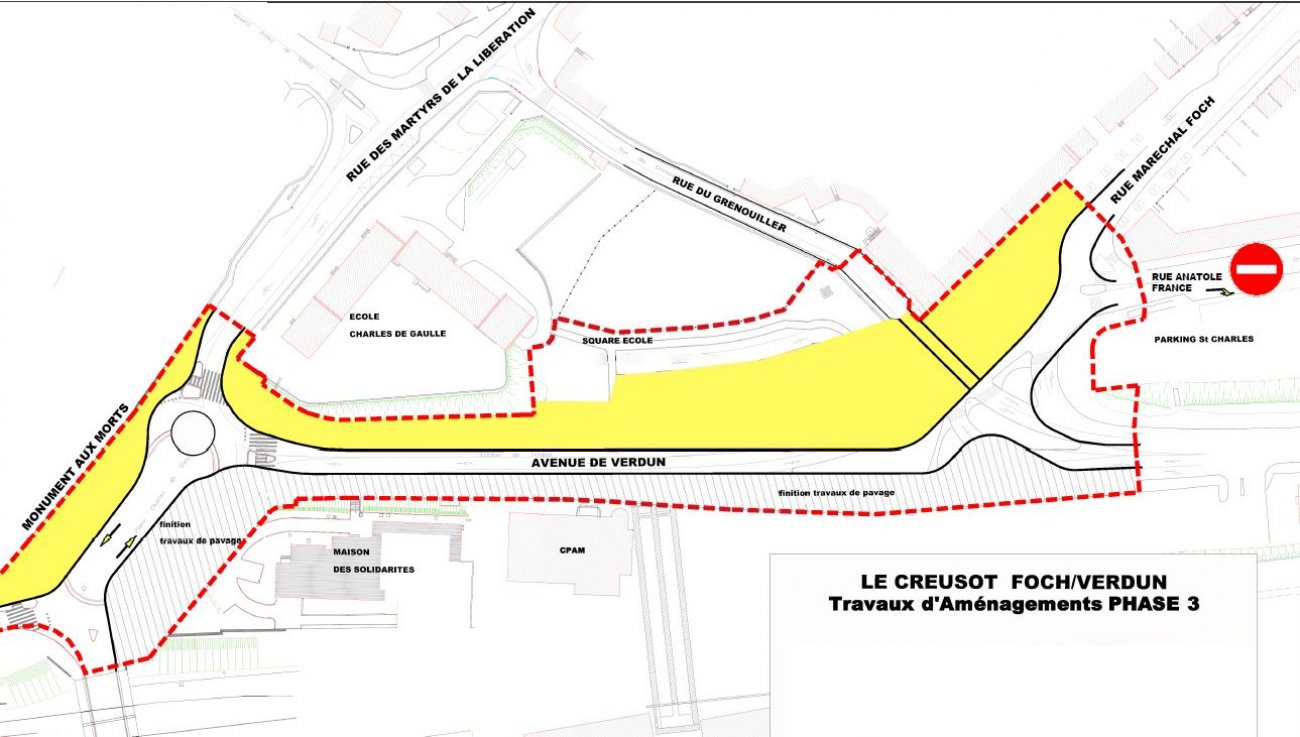