A recent report shows that France is one of the ten countries where internet users value NFT most, after countries such as Singapore, Hong Kong, Canada, Iceland and the United States. The report, published by US-based CashNetUSA, features charts and graphs ranking the countries most interested in NFTs, countries that love NFTs the most, and countries that hate NFTs. It also lists the most searched for NFTs in the world. Singapore searches for NFTs more than any other country, with 18,717 searches per million people per month; and Poland is the country most hostile to NFTs.

An NFT is a cryptographic asset that represents an intangible digital asset, such as an image, video, or game asset. The owners of NFTs are recorded on a blockchain, allowing an NFT to be exchanged as a replacement for the digital asset it represents. So unlike most digital objects that can be endlessly reproduced, each NFT has a unique digital signature, meaning it is unique. NFTs are usually bought with the cryptocurrency Ether or dollars and the blockchain keeps track of the transactions.

While the NFT market boomed between late 2020 and the first half of 2021, it has since literally collapsed, costing investors millions of dollars. Much of the industry, various reports and regulators described NFTs as a major scam. And recent events seem to prove them right, with some non-fungible tokens losing more than half their value and others being worth next to nothing. Some even predict that 90-98% of current NFTs will become worthless within the next three to five years.

But despite the debacle in the NFT market, there is still interest in these digital assets. So experts have concluded the case as follows: “For every fanatic of NFT who will tell you that it is disrupting capitalism, you will find a pessimist who will declare that it is the end of time. For every story of an artist who finally makes money earn with NFTs, you will find another that has been scammed.” CashNetUSA conducted a study on this topic to provide an overview of the countries in the world where NFTs are most popular and where they generate little interest among internet users.

According to the CashNetUSA report, Singapore is embracing the idea of ​​digital assets. This global business center is at the top of the list of countries most interested in NFTs, if we are to believe the number of online searches. The study reports that there are 18,717 NFT searches per million Singapore residents. Even the leaders of the country are involved. The Singaporean Parliament Speaker has sold NFTs of his landscape photos to raise money for charity. But he warned those who see NFTs as a get-rich-quick scheme. 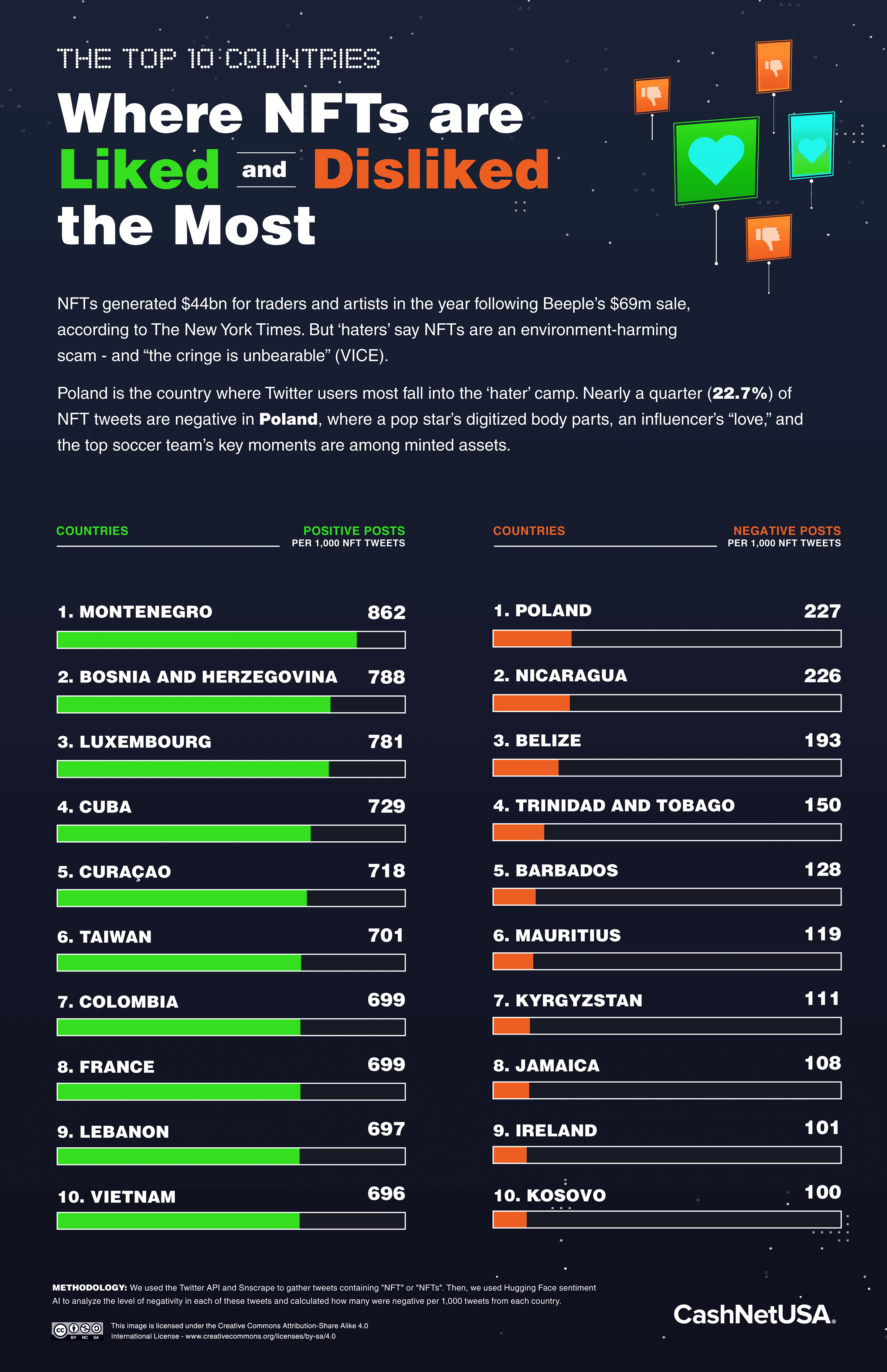 You really need to know what you’re doing. If you are not comfortable with this type of activity, stay away from it. Like bitcoin, the NFT space is highly volatile. Be careful and only invest what you can afford, said Tan Chuan-Jin, Speaker of the Singapore Parliament. With 18,313 searches, Hong Kong also ranks second on the list of most searched countries for NFTs. Canada (13,388), Iceland (11,194) and the United States (10,677) complete the top 5. France is in 31st place, with 4,656 searches per million inhabitants per month.

Next, CashNetUSA researchers analyzed the tones and sentiment of tweets on NFTs around the world. The results show that Montenegro is the most NFT friendly country in the world; 862 of the 1,000 NFT-related tweets from this Balkan state were positive reviews. Bosnia-Herzgovina (with an average of 788 positive tweets out of 1,000), Luxembourg (781), Cuba (729) and Curaçao (718) round out the top 5. France ranks eighth among the countries where internet users have the most positive reviews on NFTs, with an average of 699 positive tweets per 1,000.

The countries that hate NFTs the most

Poland has the highest percentage of people who hate NFTs. Nearly a quarter of NFT-related tweets from Poland (227) are negative reviews of these digital assets. Poles were probably not impressed when singer Dorota Rabczewska decided to transform to NFT. Rabczewska, better known by her stage name Doda, had her entire body scanned in 3D. She then split it into 406 individual parts, which can now be bought or sold as non-replaceable tokens.

The starting price for an NFT of the singer’s arms and back was $200. NFTs from “intimate” areas — or what Doda has described as his “rare” areas — can cost up to $75,000. Nicaragua, Belize, Trinidad and Tobago and Barbados all have a high percentage of negative NFT tweets.

In the case of North America, Decentraland appears as the big winner in Google’s search results. Although it owns most of the region, Axie Infinity, Sorare, and Bored Apes still exist as minorities in the southern cities. Africa is the only region with no clear winner in NFT curiosity. The lands are divided between Decentraland, Axie Infinity, Sorare and Bored Apes. Town Star also manages to secure a small region in Africa. South America, meanwhile, is the only region not interested in Decentraland, Bored Apes or anything like that. Axie Infinity dominates the entire region, with only Chile interested in Sandbox.

To determine these rankings, the company used keyword research, ranking tracking and site auditing tools. She searched for the term “NFT” in each country, added up the search volume and calculated the number of monthly searches per million people. The team also gathered information from Twitter and conducted sentiment analysis using models developed by Cardiff University.

Tweets were categorized as “negative” if the probability that a particular tweet was “negative” was greater than 0.5. To ensure more definitive results, the team also excluded countries with fewer than 50 NFT-related tweets. Finally, the team also compared search volumes of NFT projects with OpenSea’s list of the 100 greatest NFTs of all time, using the data to see which projects were most searched for in each country.

What do you think of the findings of the CashNetUSA report?

Tim Berners-Lee, Inventor of the Web: Forget Web3, My Decentralized Internet Doesn’t Need Blockchain, He Said Web3 Contrasted With His Plans For A New Web

Bought for 2.9 million, the NFT from the first tweet in history is worth just $10,000, showing the frenzy over these digital assets is fading

The NFT bubble is said to be shrinking, with sales on OpenSea falling 50% since January to $2.5 billion