A first edition took place in 2021, certainly in a festive spirit but limited due to the restrictions related to the Covid pandemic. This year, the team of La Petite Ecole de Leeds, which is part of the FLAM (Français Langue Maternelle) network, therefore hopes that the event will attract many more people, especially French people from London. Because this “Guinguette”, which takes place on Saturday 2 July, aims to raise money for “funding scholarships for the most vulnerable families in the Yorkshire region and bilateral cooperation projects with France”explains the director of the school, Henriette Mahamane.

School managed to stay open despite Brexit and Covid

If the Frenchwoman hopes that the mobilization will be stronger this year, it’s because La Petite Ecole de Leeds, founded 16 years ago by three French mothers, almost closed due to lack of financial resources. “Many FLAM schools have been affected by Brexit, with some French parents leaving the country. Not to mention the Covid that came along. Keeping the classes online only was not suitable at all for some and families left the FLAM network”the director, in office for five years, analyzes “At La Petite Ecole, for example, we went from 140 to 65 students at the start of the 2020 school year”† To this was added the departure of a person from the team. “So I had to run the establishment on my own”.

The organization of the Guinguette in 2021 was therefore, admits the French, “a real breath of fresh air for the French community of Leeds”† “It also enabled us to fund scholarships for the most vulnerable families, especially as some have suffered from the pandemic, are self-employed parents, work in the restaurant industry, have short-time work or simply lost their jobs”† As Henriette Mahamane acknowledges that La Petite Ecole de Leeds was one of the structures that received the most financial support from the AEFE (Agency for French Education Abroad) network during the pandemic – “it saved us”she assures us – she believes there is still a lot to do to maintain the FLAM network, essential, she says, to access French culture for many French children living in the UK. “Everything is centralized in London. Admittedly, there are Alliances Françaises, but they are generally more aimed at an English-speaking audience”underlines the director.

Henriette Mahamane therefore regrets that some consider these FLAM schools as mere “club” where we are going on Saturday morning. “We are more than that. We give real French lessons”she remembers, “This year we even offer the DELF (Diploma French Linguistics), which is normally only offered to people who are not French”† The director therefore wants even more recognition for the FLAM structures, whose budget remains low. “In the UK, more than 4,000 children are being educated in FLAM schools without which they would not have access to the French language”† In 2021, however, the previous French government had made the promotion and development of La Francophonie two priorities, which is why it seems paradoxical not to allocate more money to structures working in this direction. “FLAM schools are essential and have always aimed to teach children to be proud of their dual culture”.

Henriette Mahamane therefore hopes that the cultural event on Saturday 2 July can showcase all the work of La Petite Ecole de Leeds, in particular in developing and maintaining bilateral ties between France and the United Kingdom. “We introduced this project in 2019 when we took the children to Lille, a sister city to Leeds. They attended the hotel school and met the elected officials. We had the idea to show them how lucky they were to belong to these two countries”explains the director. 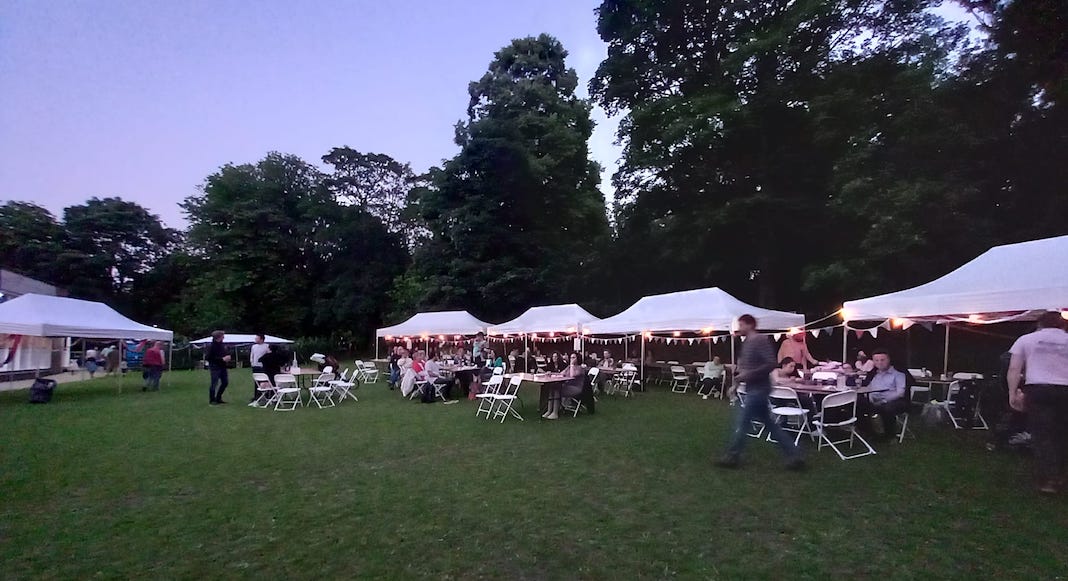 In addition to the importance of the fundraising dimension, the Guinguette will also be an opportunity to celebrate with a rich and varied program. The party starts at 4 pm with a funfair, a raffle, bouncy castles… but also a French market and a French bookshop kiosk. Children and adults can also learn during a workshop led by The Wizards of Nozothe traditional Breton dance, before listening to the group’s live music oh dear† A French ball is then followed by fireworks. “We really encourage the French community from all over England, and especially from London, to join us”launches, enthusiastically, Henriette Mahamane.