When “Bored & Hungry” opened in Long Beach in April, the establishment was not only themed on the popular NFT series Bored Apes, but also accepted cryptocurrency payments. But less than three months later, amid a crypto crash with some investors looking for the exit door, this payment option is no longer available.

The Bored Ape Yacht Club, developed by Yuga Labs, collects 10,000 minted profile pictures as NFTs on the Ethereum blockchain. The owner will receive a non-fungible token to prove that they own the only authentic version of the image.

The images show a monkey face with randomly generated features and accessories. Each of these images has a unique character. The reason the NFT Bored Ape Yacht Club is getting a lot of attention is because these avatars sell for huge sums of money. The sale of these avatars has already generated more than a billion dollars.

For the record, in September 2021, the developer of the Ethereum-based game “The Sandbox” bought a Bored Ape NFT for 740 ETH, which was worth $2.9 million at the time. 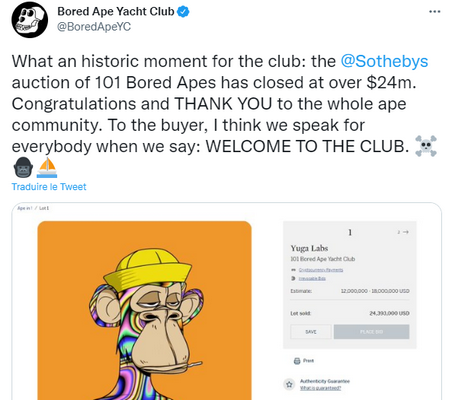 The value of NFT Bored Apes avatars is purely speculative. It’s completely subjective, like the price of Yannick Noah’s racket that won the 1983 Roland-Garros final. However, it was no coincidence that prices reached such heights. Celebrities and other web influencers have played a key role in the emergence of this new fashion. Athletes, musicians and other influencers choose these NFTs as avatars on Twitter.

For example, actress Gwyneth Paltrow tweeted about the BoredApeYC, while Jimmy Fallon interviewed Paris Hilton on the subject. Likewise, rappers like Snoop Dogg and Eminem came into play. The latter spent $462,000 to get hold of an avatar. It was enough for the general public to take an interest in the phenomenon and immediately give it a certain value.

However, becoming a member of the Bored Ape Yacht Club also comes with certain benefits. As the name suggests, it is actually a privately owned company. If you own one of these NFTs, you can join the club. Members have access to a private Discord server and can be invited to exclusive parties where they can meet celebrities. Owning a Bored Ape gives access to other NFTs, which can be resold for huge sums of money. For example, Yuga Labs has offered a Bored Ape Kennel Club dog NFT to all Bored Ape owners.

The hype continues with the restaurant “Bored & Hungry”

Nguyen acquired Bored Ape Yacht Club Collection NFT #6184 from Yuga Labs for approximately $250,000, which enabled him to complete the project. The holders of these NFTs have the commercial rights to their tokens and can thus develop business around their “jaded monkeys”. The restorer also has two tokens from the secondary BAYC collection: the Mutant Ape Yacht Club (MAYC).

So, armed with Bored Ape Yacht Club (BAYC) intellectual property, Andy Nguyen transformed the space to showcase how the marketing potential of BAYC and NFTs can translate into the real world with his business.

“The goal is to give back to the growing Web 3.0 community. And to open the doors for those who want to learn more about this new Web 3/NFT world,” he said. “Our job is to educate the public about this new future world. And show people that you can build a brand/company from that IP. Remove the stigma of “It’s just a jpeg”. †

It should be noted that BAYC and MAYC owners took advantage of perks at launch, most notably free meals. 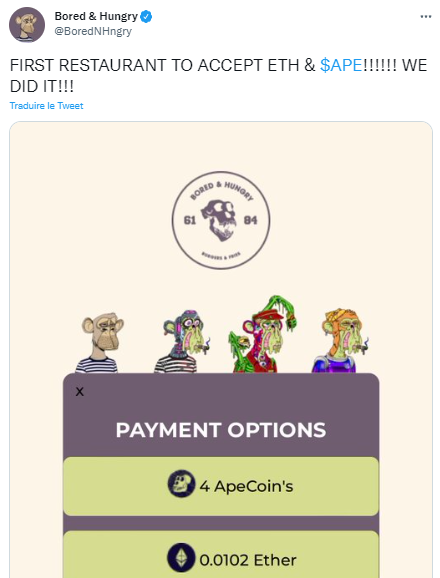 The cryptocurrency world is struggling, with prices dropping to levels not seen since late 2020. The decline is likely due to several factors, including general economic uncertainty in the stock market, inflation, the panic caused by the massive sale of whales, etc.

It certainly didn’t help the cryptocurrency industry when London-based crypto bank Celsius Network announced a freeze on withdrawals, transactions and transfers between accounts earlier this month.

Celsius is a peer-to-peer lending network where customers deposit cryptocurrencies that are then lent to others. Cryptobanks such as Celsius are inspired by the model of traditional banks. They pool deposits of cryptocurrencies such as bitcoin and offer loans and interest, often over 10%, to savers. The problem is that these new players are not regulated and nothing protects the depositors’ money. In addition, unlike traditional financial institutions, they are not subject to a minimum capital threshold in their reserves.

Within hours of Celsius’s announcement, cryptocurrency values ​​plummeted: Bitcoin fell 10%, Ethereum lost 19% of its value, and Dogecoin lost nearly 15% of its value, or about $0.01. As a whole, the overall cryptocurrency market floated below the token threshold of $1 trillion, compared to $3 trillion last November.

In the cryptocurrency industry, companies are tightening their belts expecting the recent price drops to continue for some time to come.

Cryptocurrency exchange and wallet company Crypto.com has announced it will lay off 260 employees, or about 5% of its workforce. A week earlier, cryptocurrency exchange Gemini, founded by the Winkelvoss brothers, announced it would cut its workforce by 10%. The brothers blame the cuts in their staff on “turbulent market conditions that are likely to continue for some time to come”.

One of the largest cryptocurrency companies, Coinbase, recently announced that it is freezing all new hires. This included withdrawing some offers that candidates had already accepted. Coinbase’s stock price has fallen more than 80% since its peak last November.

The steady boom of bad news has sparked the start of another “crypto winter”. The cryptocurrency world has seen at least three such periods. During this downturn, it is common for a significant number of cryptocurrency related projects and businesses to fail.

Since the collapse of the giant market, crypto companies have laid off employees and Congress has even taken the first steps to regulate the industry for the first time in history.

And “Bored & Hungry” is no exception.

On Friday, the Los Angeles Times reported that Bored & Hungry will no longer accept cryptocurrency in exchange for burgers or vegan soft drinks. The daily also said owner Andy Nguyen also did not respond to emails about the change, though a cashier provided non-committal answers and very few details when asked questions.

With both tokens depreciating more than 60% since early April and double-digit intra-day swings, it would be understandable if a company were hesitant to accept them in lieu of dollars. But utility can also be a factor. During the restaurant’s grand opening, an employee told The Times that crypto payments were cumbersome and largely ignored by customers.

“Yes, Ethereum is a currency in the sense that you can exchange it for NFTs and things like that…

Another Bored & Hungry restaurant customer told the Los Angeles Times, “People want to keep their ethereum. They won’t want to use it.” Customer Richard Rubalcaba said “I don’t know how [les achats de cryptomonnaie] would work, with the crash.

Many of the restaurant’s patrons said they weren’t seasoned cryptocurrency enthusiasts and just frequented the establishment for dinner. One customer, Jessica Perez, said, “We rate it at the same level as In-N-Out, maybe even better.”

The thing is, even though the crypto market has crashed, there are customers ready to buy. A startup has hired more staff and there is at least one financial planner telling customers to get on board. Whether these people get more than one meal from Bored Ape is an entirely different story.

What do you think ?

“Cryptocurrencies have ruined my life”. The mental health crisis is hitting Bitcoin investors hard. Many of those who sign up have no knowledge of cryptocurrencies

Traders self-sell their own NFTs to drive prices up, according to a new report from Chainalysis many NFT traders engage in ‘wash trading’

About 90% of NFTs will be worthless in 3-5 years, Coinbase co-founder Fred Ehrsam warns