Well-known and recognized artist, Guillaume Côté is responsible for the choreography of cryptocurrenciesa work that questions the – often distorted – relationship between man and nature.

Presented for the first time in preview at the Festival des arts de Saint-Sauveur in 2019, cryptocurrencies was part of the Danse Danse program in 2020. After much delay, the piece finally comes to life on the stage of the Théâtre Maisonneuve, having previously visited several cities in the province.

Piece for four dancers – Guillaume Côté herself, as well as Greta Hodgkinson, Natasha Poon Woo and Casia Vengoechea -, cryptocurrencies has a lot of ambition. A text by Canadian author Royce Vavrek, written at the request of the choreographer, meets original music by composer Mikael Karlsson and refined visual effects by Montreal studio Mirari.

The story, inspired by cryptozoology (the search for animals whose existence cannot be proven), takes on the air of a fable: a floating couple seeks redemption, who will undergo a great quest: to make this mythical creature “monstrous and magnificent” that appears in the dreams of man. Wild, this dreamed and now real creature cannot be tamed or tamed. The couple enlists a surgeon who, armed with her instruments, will attempt to humanize him. An operation that will drain the creature from his being, leading to his rebellion.

Of cryptocurrenciesCôté therefore questions this tendency of man to want to make nature in his image, to subdue it, with the disastrous consequences that this can entail.

fairy tale at the Frankenstein

The subject of this modern nightmarish fairy tale, which can evoke Frankenstein True The little Mermaid, is not uninteresting in itself. The narrative framework presented to the audience has the merit of being very clear and we understand what it is all about. The text, read by voice-overs with much (too?) emphasis, sets the tone. The projections, well-developed and evocative, lead us to this dreamy fantastic universe, in which a shadow still floats. The music, carried by stringed instruments and mixed with electronic sounds, creates a disturbing atmosphere with a certain melancholy.

The talent as a performer of Guillaume Côté, principal dancer of the National Ballet of Canada, who has danced for the largest companies in the world, is undeniable. However, his choreographic work in this creation – the first of his new company Côté Danse – remains quite conventional, in line with the neoclassical, with some contemporary influences.

There are indeed a few dashed lines here and there, jerky movements, virtuoso flights, graceful pas de deux and the dislocated twists of the creature – let’s underline Casia Vengoechea’s interpretation in this regard, which offers the strongest of the show. That said, the tables follow each other without surprises, sometimes in a repetitive way. Too bad, because the subject of the piece could have opened the door to a more innovative proposal.

The movement, even if it is incessant, often seems to be absorbed by the rest of the stage elements – the off-camera narration, the projections, the music, the lighting. Thus it rids itself of its substance. We understand the appeal of using words to support a dance production, and some choreographers do it brilliantly. Yet there is this danger: if language says everything, the body says nothing and loses its suggestive power. 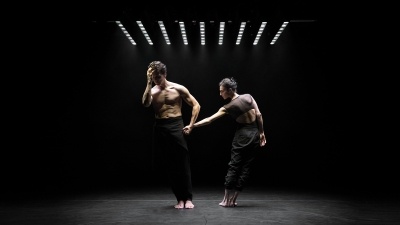 At the Maisonneuve TheaterUntil May 14th