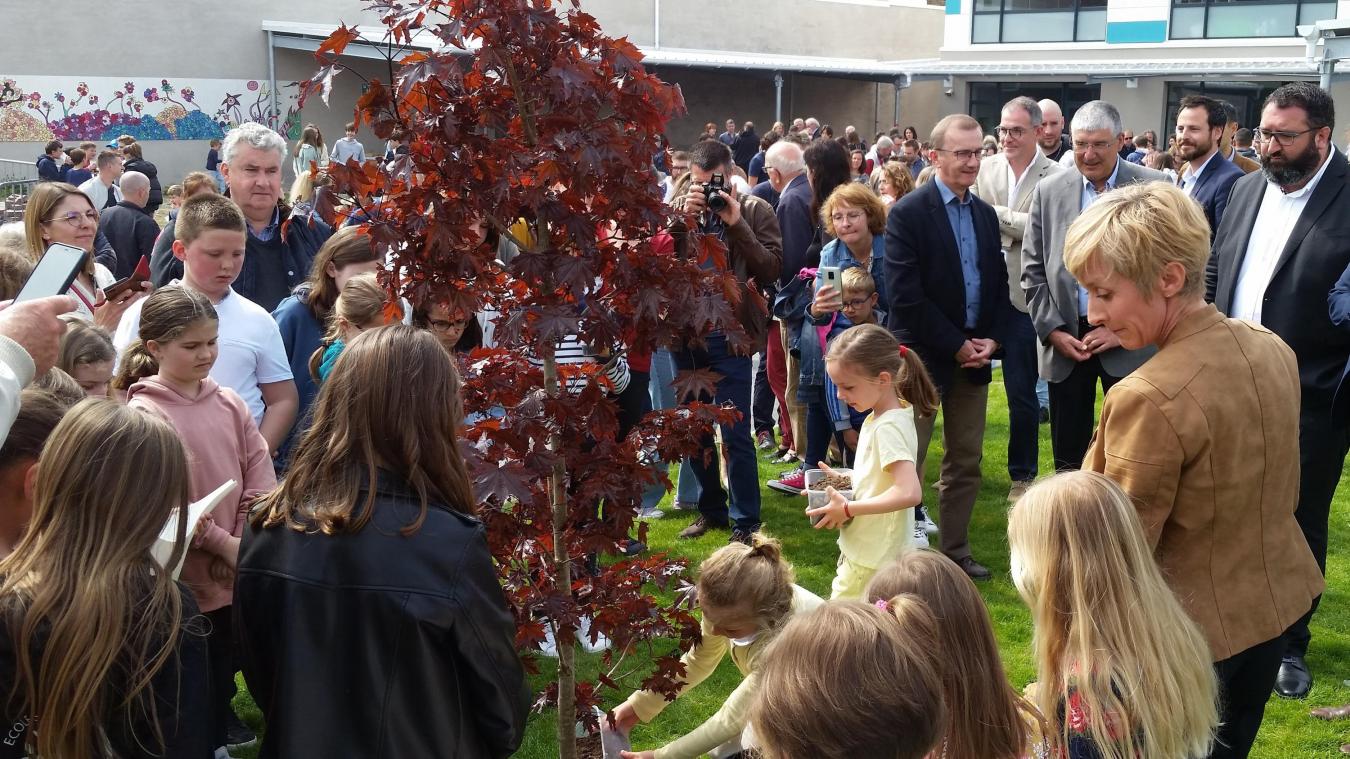 
The Sainte-Marie School was installed in the the same buildings since the end of the 19th century† Despite the successive rehabilitations and modernizations, it was time to move on. Indeed, the toilets were still in the yard and the classrooms were poorly heated…

In January 2021, the imposing building on Rue du Chevalier-de-la-Barre was therefore demolished to make way for modern buildings, built from May 2021. After a 5-year project, the moment of inauguration, Saturday, which was welcomed 250 people, including former students, teachers, directors…

From 11 am the children have introduces the ceremony with a song, then the many personalities thanked. The president of the APEL intervened, then Anne Mairesse, the director of the school, followed by the various partners of the operation, in particular the Organization for the Management of Catholic Education, the Association Foncière de Tourcoing and the Leie (which 71 private institutions, including that of Sainghin) and the Diocese of Lille (with 110,000 students in private schools). Finally, Matthieu Corbillon, the mayor and Sébastien Huyghe, the deputy, concluded the speeches.

A restored statue of the Virgin

At 11:50 am, students and officials dropped a few shovels of soil and water to the beautiful red maple planted for the inauguration and offered by the new nursery in the village: Pépinières Cambium. In the afternoon, the celebration concluded with the blessing of the school and of a statue of the Virgin (restored) presented by a family whose children go to school in Sainte-Marie. It all ended with a reception organized by the construction company for the new school.

There is still some work to be done in order for the school to function fully.in particular the creation of a 40 m² terrace and the development of green spaces in order to obtain the Eco-school label.

It was the Abbé Courtois who, in 1886, had the patronage of Saint-Joseph built, opposite the Grand-Place (it was demolished in 1994), and a religious kindergarten in the Basse Rue, then called Asile de la Sainte-Family. At that time, the village had a girls’ school (150 students), at the intersection of Rue du Chevalier-de-la-Barre and Rue de l’Égalité, is a boys’ school (210 students, it is today music school) . The kindergartens were located on the top floor of the town hall, above… the Dubois estaminet!

The school of Abbé Courtois was run by the Sisters of Wisdom, but closed in 1888 after a complicated legacy story. The building was purchased by the Civil Society of Catholic Works on August 28, 1889, but it remained vacant. The asylum was reopened in 1892 with the arrival of Abbé Bordoduc in Sainghin. The sisters returned on November 13, 1892, and welcomed about thirty children. In 1895 the school already had 95 pupils.

Sequedin: they interrupt their retreat so that their sunbed can open again

Santes: bicycles good for use in Notre-Dame and Sainte-Thérèse . schools

Metropolis Lille: 60,000 homes to be built in the next ten years

Read more about this topic(s):

No, to this day there are still far too many infections in schools, be it schools, colleges or high schools. working …Read more