The sports world attaches increasing importance to the new use of Web 3.0. The Rugby Club Toulonnais (RCT) is the first French rugby club to launch an ambitious strategy around new applications developed on the basis of blockchain technologies. In particular the fan tokens, NFTs and the metaverse. After being the first club to win the European Rugby Cup for 3 consecutive seasons, the RCT thus becomes the first rugby club in France and Europe to partner with a Web3.0 consultancy to build and execute its strategy by the largest players in the market. 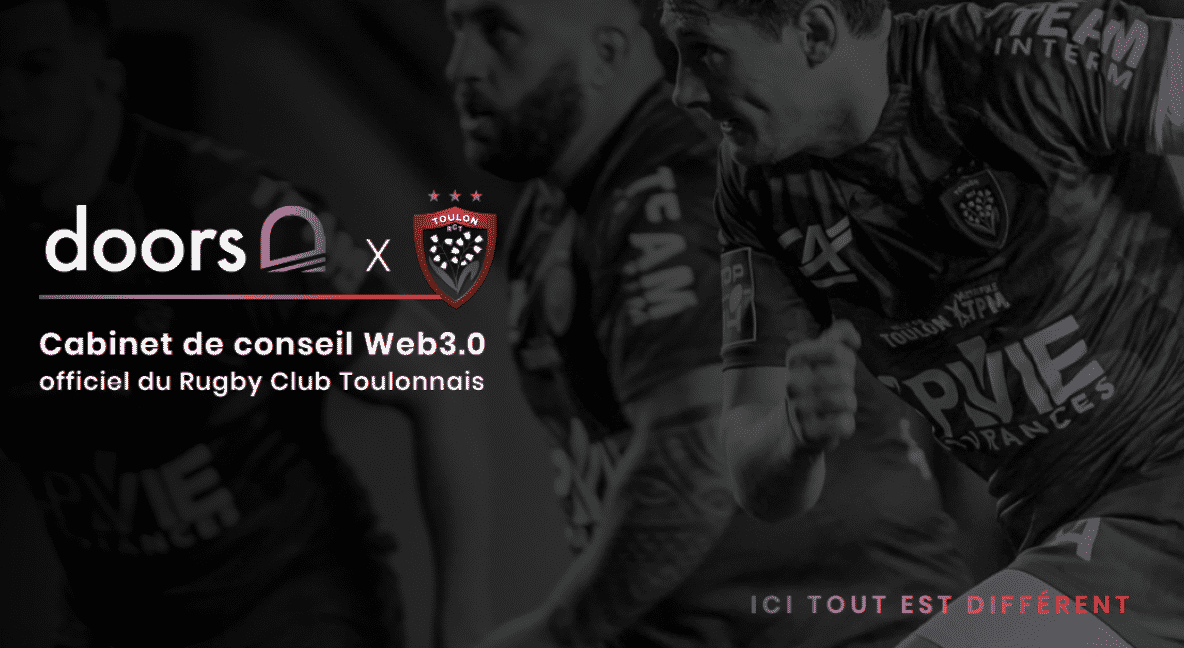 Doors3 is the first independent consultancy specializing in Web 3.0.

From strategic thinking to operational implementation, Doors3 helps companies bring their crypto, NFT and metaverse projects to life, emphasizing their identity while integrating Web 3.0 specific codes. Doors3 specializes in the sports, entertainment, luxury and arts sectors and already supports major players in these sectors. Founded by passionate entrepreneurs, trained in recognized consultancies and anchored in the crypto, NFT and metaverse universes since 2017, Doors3 offers its clients its business and technology expertise and its ecosystem of partners.

The RCT, an iconic rugby club in France and beyond

The Rugby Club Toulonnais (RCT) is a major player in French and European rugby. Founded in 1908, the RCT has built up a great track record throughout its history. Notably, it is the only European club to have won three consecutive European Cups, in 2013, 2014 and 2015.

The Rugby Club Toulonnais is also one of the clubs with the most media coverage in rugby in the world. A reputation that has mainly been acquired thanks to the talent and charisma of the stars of world rugby who have evolved with the red and black jersey, such as Jonny Wilkinson, Tana Umaga or Frédéric Michalak. Today the RCT has world champions Eben Etzebeth and Cheslin Kolbe in its ranks, as well as French internationals such as Charles Ollivon and Gabin Villière.

Led by Bernard Lemaître, the red and black club has great ambitions in the field for the coming seasons and also wants to develop its appeal through structuring and innovative projects, including the world of Web 3.0.

Strategic support for an involved club

Doors3 has been working with the RCT for several months on the definition of its 360° Web 3.0 strategy. The acculturation of all teams in this new universe and the reflection around the experiences offered to fans of rouge & noir to engage them and make them live exclusive experiences are at the heart of the support offered by the company.

While the ecosystem of NFTs and crypto-assets is booming, the choice was made to turn to leading players that will enable the club to position itself alongside the biggest sports brands that have started investing in these new fields of digital innovation.

It is all the more important to underline that the RCT wanted to think about Web3.0, which is part of its overall digital innovation strategy. It is in this context that Doors3 gives the club a vision and understanding of these new ecosystems that add value to the club, current and future fans.

While Web 3.0 is a way to strengthen the club’s digital strategy, the RCT does not forget the moments of living in the stadium and all that makes the life of an authentic club.

François PESENTI, Executive Director of the RCT †Retaining its strong identity and its local roots, the RCT is entering a crucial phase in its development, which will allow it to promote its identity through the digital world, thereby attracting new generations to the values ​​of Rugby. We are delighted to partner with Doors3 and have the opportunity to be one of the first clubs to launch such ambitious initiatives.†

Karen Jouve, CEO & Co-Founder of Doors3 †We are very happy to support the RCT since January 2022 around their strategic thinking in the Web 3.0 universe. This is not only an opportunity to innovate and fully enter this new ecosystem, but also to bring new experiences at the service of fan engagement. Originally from Toulon, it is with a special attachment that I accompany the RCT teams to carry out these projects that will be officially announced on 11 May during Global Sports Week in the presence of the key partners of the ecosystem. Backed by the values ​​it holds dear and the fervor of its supporters, the RCT will thus become the first rugby club to implement such an ambitious strategy, surrounded by the biggest players on the market.† †

After football where giants like Binance, Crypto.com or Socios have had a big impact. Recall that Socios recently signed a contract with Lionel Messi. After F1, which has almost one crypto sponsor per team, or even the NBA in the US, Web 3.0 has entered the big rugby family through the RCT, an iconic club in the south of France looking to position itself well on the forerunner of the field of innovation to support great athletic results on the pitch.

Get a summary of news in the world of cryptocurrencies by subscribing to our new daily and weekly newsletter service so you don’t miss out on the essential Coinstand!

Passionate about Blockchain technologies and cryptocurrencies for several years, I firmly believe in the mass adoption to come. Always on the lookout for the latest trends in the cryptocurrency market, I’m happy to share all its secrets with you!