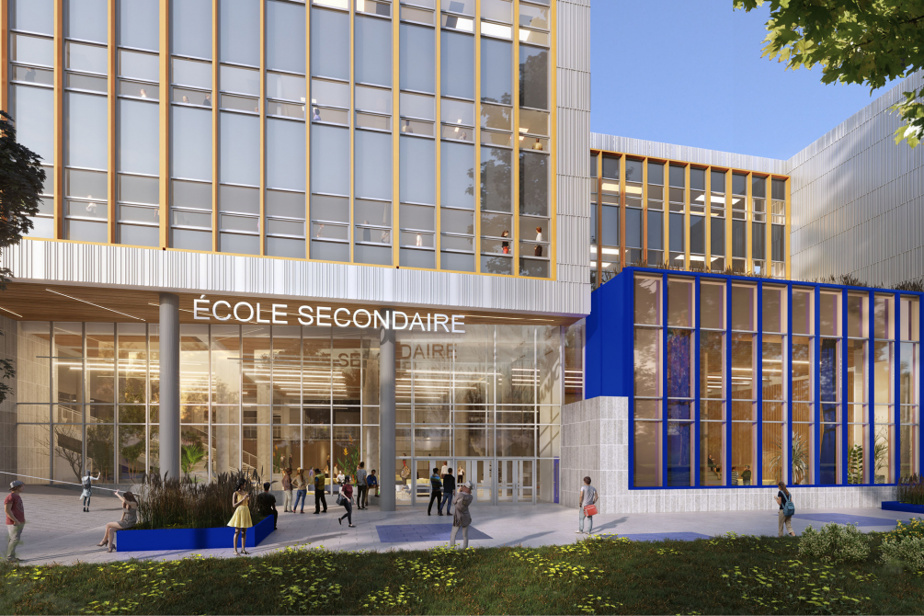 In addition to concrete and aging high schools, often so populated that they could contain multiple villages in Quebec, 13 brand new high schools will be added to the landscape by 2024. Yes, with windows and a clear desire to get away from the bunker look.

This is clearly stated in all projects for new secondary schools. There will be “natural light”, windows through which the students will see the sun, the rain, the snow. A simple look at the high schools under construction is enough to guess that the key word especially should not look like the general schools built in the 1970s.

The idea, says Martin Duquette, deputy director-general of the Pointe-de-l’Île School Service Center, “is that the schools don’t look like big shopping malls, but they promote the family spirit.”

A big family, of course: the future schools of Montreal-North and Anjou, scheduled to open in 2024, will be able to accommodate 1,700 and 1,800 students respectively. Laval’s is planned for 2000 students. We stay in large numbers.

That 13 schools are under construction is exceptional, notes Nicolas Prévost, president of the Quebec Federation of Educational Establishment Directors (FQDE).

You have to give that to the CAQ: they have invested heavily in education.

Nicolas Prévost, President of the FQDE

In contrast to previous governments, which invested very little in schools themselves, built up a very large maintenance deficit, which led to decline, he emphasizes.

Here’s what the Court of Audit wrote in 2019: the amounts allocated by the government for the maintenance of school buildings “have almost always been less than 2% of their replacement value, even though this is a recommended minimum to keep them in good condition.” .

For a lifespan of at least 75 years

Who ensures that the new schools are inviting, functional and sustainable? The Legault government entrusted the preparation of the reference guide – which spans 1,500 pages – to three architectural firms, Prisme, Lemay and Leclerc architectes.

In the 1970s, she notes, the polyvalents were built “on the edge of the prison model”, very inwardly oriented. That’s because in one neighborhood the arrival of a thousand teenagers was not looked at with a good eye.

And no, it wasn’t to save on heating that so many multipurpose buildings (especially in Montreal and its more or less immediate suburbs) were built without windows. “We really wanted to avoid the students being distracted by what was happening outside,” explains Ms.me Flemish.

Today it is the exact opposite. We want windows, lots of windows, also wood, and we want to get away from the maze-like multi-purpose space.

We build schools with a real heart, with places of socialization conducive to a sense of belonging, with a clear entrance too.

Another priority: placing the school “at the heart of the neighbourhood”. This will be even more the case in the LaSalle borough than elsewhere. The new secondary school has been built a stone’s throw from a primary school, Cégep André-Laurendeau, the Aquadôme aquatic center and the Théâtre Desjardins. The facilities of some will benefit others, the future school will come with a large football field.

Ana Rebeca de Leon, 16, admits she dreamed of finding herself between beautiful walls. Her family life has resulted in her being in her third (old) high school. She has a particularly bad memory of one of them, in the suburbs of Montreal, “where classes were held in the basement, with no windows. It’s demotivating.”

There are no doubt other factors at play, but she believes that the crowds of students, noise and lack of light help “make everyone look tired in the afternoon.”

Claudine St-Georges, a special education technician for 35 years at the Antoine-de-Saint-Exupéry secondary school in Montreal, until her retirement in 2020, remembers everyday life at school, before some of the young people move to an adjacent building. “There were so many people in the corridors that we seriously considered putting up traffic arrows. So many people, it was so noisy! †

Architect Krystel Flamand assures that in the plans for new secondary schools “clear preconditions have been drawn up to limit noise”.

The image of public schools must be restored

Mélanie Hubert, president of the Syndicat de l’enseignement de l’Ouest de Montréal, is pleased with the construction of a new secondary school in LaSalle.

Independent of the quality of education, “beautiful buildings contribute to the image of a school. If it looks modern and bright, it colors parental perception and can help improve public school perception.” Even though, in the light of the exodus to the private sector, the retention of young people cannot be achieved through architecture alone, in his view. What the research says, says Roch Chouinard, professor emeritus in the Faculty of Education at the University of Montreal, is that the aesthetics and size of a school contribute to school happiness and motivation, without it being the single most important factor. After all, Chouinard points out that when someone is asked about their high school memories, “they will talk a lot more about being a failure and having no friends than about not having windows.” †

Yes, it counts, but most importantly, he says, “it is a school where a student feels good, where he feels independent, in contact with others, with a good sense of self and with whom he feels involved. to hear”.

How much will the new secondary schools cost?

In the office of Jean-François Roberge, Minister of Education, it is stated that the cost is 2.7 billion, or 100 million more than the total of the tenders from 2020. In 2019, Jean-François Roberge had indicated that the construction of new schools would happen in “unprecedented” time frames. In fact, the update of the guide to the criteria for the construction of secondary schools had not yet been done (unlike the guide for primary schools which had already been prepared). The $1.1 billion already quoted in the media for the construction of the new high schools was, in fact, the only reflection of an estimate of what these schools would have cost had the plans been based on the old standards, those of 2009, says Florent Tanlet, press attaché of Mr. Roberge.

Build without forgetting to renovate

“For young people living in poverty at home, it’s important to be able to say to themselves, ‘Wow, at least we have a good school,'” observes Frantz Benjamin, Liberal MP for Viau, to which Saint-Michel also belongs, In Montréal.

This time, the new school will be built at the equestrian center next door, in Montreal North. He can only be happy that this neighborhood – one of the poorest in Canada – is getting a brand new branch.

But at the same time, he also has a twinge of heart at the thought that his young people, in Saint-Michel, are staying within the old walls of their secondary schools. The same ones who welcomed them, his brother and him, more than 30 years ago.

The MP recalls his rush to ring the bell “so he could go to the park and see the sun”.

Mr. Benjamin is deeply saddened for the youth of Sainte-Lucie Elementary School, who have been transferred to Louis-Joseph-Papineau College in recent years as their school fell into disrepair. Children will only have known Louis-Joseph-Papineau, as they spent almost all of their primary and secondary education there. “Ten years of their lives…”, he drops.

Mr. Benjamin also took part in the long crusade to provide Louis-Joseph-Papineau with windows (which are still not installed).

I know parents who bleed to send their kids to a school other than high school.

The fact remains that a secondary school is much more expensive than a primary school and cannot all be built at the same time. Frantz Benjamin knows this well, but “out of social justice” he is advocating that at least improvements be made to the old schools where the vast majority of young people are held.

He mentions in this regard the concert hall that Joseph-François-Perrault has been asking for for years (still in Saint-Michel), where the music program enjoys an excellent reputation. If it were built, it could be accessible to residents of Saint-Michel, a neighborhood that really lacks cultural infrastructure.

In 2019, the Court of Auditors noted that time is of the essence. All levels together, the schools are on average 50 years old. “The more time passes, the more the condition of the buildings deteriorates and the more we risk having to rebuild them rather than repair them. †

One of the schools under construction, that of Châteauguay, in fact succeeds in demolishing the existing school.

But with this exception, the polyvalents of the 70s will still be visited, however criticized they are. And from a strictly architectural point of view, they have value because they are representative of their time, emphasizes Claudine Déom, professor at the University of Montreal’s School of Architecture since 2006.

But we can very well adapt them to today’s needs. She cites the example of the old HEC Montréal building, which was in the style of old high schools, with windows drilled into the large concrete facades.